The wife received both the Planet Hulk and World War Hulk trade paperbacks for her birthday recently, both of which we had been keeping an eye out for at our LCS, but either they weren't carrying them, or more likely they would repeatedly sell out of them as they would come in.  It's easy to see why, as they're if not the best, then certainly the most prominent Hulk comics to come out in... well, ever.  Seriously... name another major Hulk story...
Future Imperfect maybe?
Hulk: Gray possibly, but unlikely?
Really though, there are milestones in the Hulk's life, but specific storylines rarely stand out.  Most of these milestones deal with shifts in the Bruce Banner/Hulk split-personality dynamic.  Mr. Fixit, The Maestro, the Professor ("smart Hulk"), Savage Hulk, Hulk Red, but aren't in themselves specific storylines that you could point anyone to, but different manifestations of the character that last over an extended period of issues. 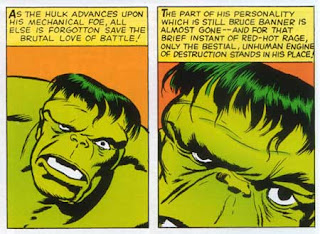 I'm not a regular Hulk reader, and hardly what you'd call a Hulk fan.  I find the Jeckyll and Hyde dynamic fascinating, but in a limited dose, and the cathartic "Hulk Smash" is equally entertaining but in equally limited doses.  That Banner fights his monster, his inner demon so to speak, is the core of the character, and to triumph would be the character's end, so as long-form storytelling, the Hulk will get repetitive and stale, or, as it has, lead to numerous shifts in the dynamic between Banner's controlled emotions and intellect, and the Hulk's primal nature.
If you haven't read Planet Hulk or World War Hulk, but intend to, I should note that you can skip the Prelude To Planet Hulk trade paperback, which collects the four issues prior to the Planet Hulk series and the Hulk files from the Official Handbook To The Marvel Universe.  It's more a Nick Fury story than a Hulk story and a thin one at that.  The opening pages of Planet Hulk reduce the Prelude chapters to a few panels and that's really all it needs.  It reiterates the point that a successful Hulk story should always deal with the human/humanity side of the character more than the Hulk Smash.
Planet Hulk is interesting in that yet again an intellectual transference between Banner and Hulk takes place, and for a new/returning reader like myself, I found it confusing at first.  Hulk in the story is obviously not just a dim, primal creature, but capable of at times incredibly intelligent and tactical thought.  Writer Greg Pak took aspects of gladiator movies (like Spartacus and Gladiator) and transferred them into a sci-fi/superhero setting and it's in this level that the story succeeds so incredibly, but the Hulk vs. Banner element is unfortunately almost negligible.  There's only a few brief moments that relate to that struggle, otherwise a semi-intelligent, rage-prone Hulk is the story's figurehead, but it's the supporting cast who rotate through the spotlight.

World War Hulk secedes Planet Hulk as a direct sequel better than a stand-alone event, although it is little more than a gratuitous 200 page fight sequence that squares the hero of Planet Hulk off against the rest of the Marvel 616... yet it still smartly forces the question whether the reader should be rooting for the Hulk or every other hero.  Again, the battle between Banner and Hulk is left behind, although there are a few instances of the Marvel heroes attempting to appeal to the punier side of the green machine.  But again, it's less a Hulk story per-se, than a Iron Man/ Reed Richards/ Dr. Strange/ Sentry story.
To me, and I know I'm in the minority, the Ang Lee Hulk film expertly captured the character best overall, understanding why Bruce Banner is so repressed emotionally and then drawing out the uncontrollable beast inside him, leading to some interesting but not overblown action sequences.  People dislike Eric Bana's performance as Banner, calling him uncharismatic, but I think that's entirely the point, he's burying everything.   Ed Norton captures the Banner in the Louis Leterrier Incredible Hulk redux differently, less repressed, and struggling more with his inner issues, rather than ignoring them altogether as Bana's Banner did.  I did like Norton's Banner a lot, especially the aspect of taking pleasure in letting the monster loose.  A s an homage to the TV show, it was incredibly (*groan*) fun, up to a point, as I found the Hulk sequences less appealing, with the green goliath looking more plastic, and the final collision with the Abomination tedious and visually boring (a narrow corridor of Toronto decorated as Harlem in which only the street but not the buildings on either side of it are impacted by the fight... yawn.  They should have take a page from Cloverfield on how to properly damage a city). 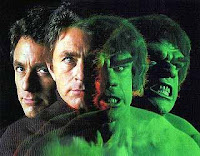 The TV show, for all it's 70's eau du fromage, broke down the character to the essential man versus self conflict, and parsing it through the "running man" formula of episodic
programming.  It worked for a time but after a few years the same realization crept forth as it did in the comics, Banner can't win in his struggle or there'd be nothing left.  Those stories of emotional turmoil get stale since the character never grows, never moves beyond his singular mission.
A recent BBC mini-series called Jekyll dealt delightfully with the modern notion of the monster split-personality myth in a much different way, with it's Banner, Dr. Jackman accepting his altar ego and cutting a deal to let him loose from time-to-time.  This surprisingly revitalized the Jeckyll and Hyde myth in the same way the Hulk did in the 1960's... but does that make the Hulk now irrelevant?
My recent venture into the Hulk leads me to wonder why the character seems to have played second fiddle in his own series for so long (even now having been usurped by Hercules).  Is it because, in the comics, they've stalemated the conflict between Bruce and his other form?  Is there anywhere left for Banner to go with his green rage other than either a) accepting him or b) destroying him (as happened when the TV Hulk came to an end).  Is the Hulk a better supporting player as a misunderstood hero/villain than central figure overall?
Posted by KENT! at 8:46 AM

The Hulk not just a dim, primal creature, but capable of at times incredibly intelligent and tactical thought.That's not actually true.It's prejudged preception people got because of the way the dum Kronk Hulk was been portrayed as an idiot.Original,the Hulk intellect switched around from mean to MacGyver smart.The early would use anything as a nearby weapon to defeat a bad guy or confuse the Avengers or other.Marvel writers just got stuck in a rutt with the retard Green Hulk and Peter David spent to much time overating his Grey Gay Hulks intelligence.And the Gladiator Hulk isn't.It was early in a subterranean story-introducing Tyraineus as a character.The Hulk dressed in armor had to fight a big .blue robot in an gladiators arena.
Nothing is new at Marvel despite their claim.We are the House of Ideas.Now they just the House of Everyone Elses ideas-including some their own from the past.