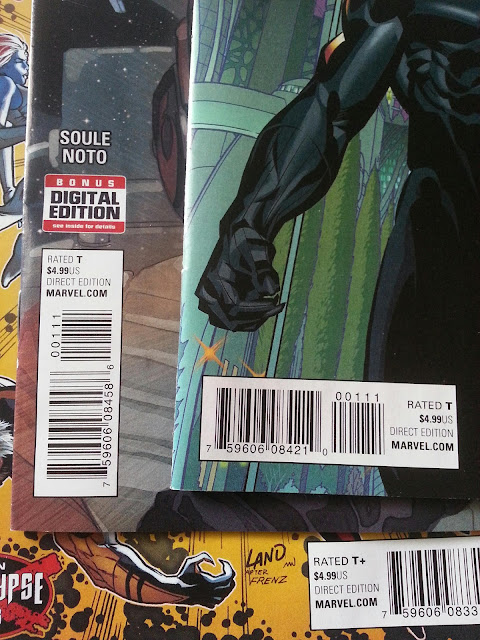 You might think "oh, it's just the special first issue of Poe Dameron and Black Panther", but then how do you explain the random $5 price of Uncanny X-Men #6?  Nope, this is just the start of the $4.99 book at Marvel.

I know Marvel’s justification is the books are now 30 pages, but are they really?  Uncanny X-Men does actually clock in at 30, but Black Panther, stripping out the title pages and backmatter is only 22 pages of story.  Poe Dameron likewise is only 22 pages of main story with a, how shall I say, aggressively needless BB-8 backup cartoon from Chris Eliopoulis.  The man is a fine cartoonist but I really don't want to pay an extra dollar for a cutesy short story.

I'm guessing Marvel is trying to suction the money in the comics marketplace in advance of DC's Rebirth at $2.99. Even though most of DC's books are going twice monthly it's still 15 cents per page (assuming they're not dropping the page per issue rate to 18 or something dumb like that).

The problem here is Marvel is clearly making a more desirable product in most cases and they know that people buy primarily on character and story.  DC still is having a hard time establishing its New 52 Universe and characters.  Their events just aren't catching on, and the hype has yet to sustain itself into any long term allegiances. Plus they don't have Star Wars.  All of DC's books could be $1 and I still don't think they could get people to drop a $4 Star Wars book for four DC books.  That's how poor the reputation of their product is. 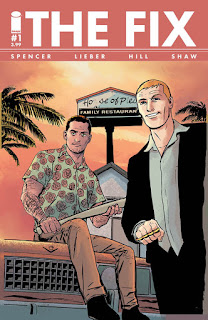 If people truly bought on price point and value per page, this week's clear winner would be Nick Spencer and Steve Lieber's The Fix from.  It clocks in at 34 story pages for $3.99.  That's under 12 cents a page from the same team that brought you the awesome Superior Foes of Spider-Man booke you foolishly didn't buy.  So buy this one and make up for your mistake.

Anyway, the point here is I had a pretty big problem with thw $3.99 price point when it came in a couple years ago as Marvel’s standard, and while I resister for a while, the lure of the product was too strong.  But as the Canadian dollar weakens and a $4 book becomes a $5 book, and a $5 is thus $6.25, I have a hard time justifying my hobby.  As much as I enjoyed both Poe Dameron and Black Panther, I can't support them monthly... I have to wait for trade and probably buy them for a discount through other non-brick-and-mortar comic store channels.  That's right Marvel you're sacrificing both the viability of your titles and the longevity of the retailers whom you sell through for your greed.

Black Panther debuts with it a lot of positive media exposure, and I know a few people who wouldn't otherwise read the character (or comics in general) who are going to check it out... but how many people at $5 per issue are going to leave it on the stands?  Or buy only issue 1 and not return?  Or not contemplate picking up other comics because of the price?  Shoot one's self in the foot much?

As a guy who loves to read and share and talk about comics this bums me the hell out. 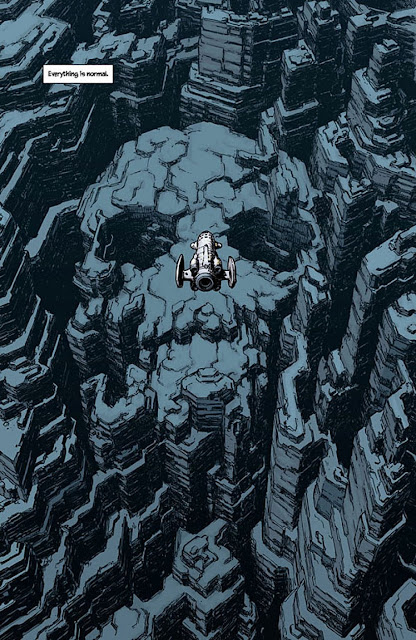 Just look at the depth on this page.  One of the hardest things to do as an artist is creating a real sense of depth and Burnham here has done it on so many levels.  I imagine some tweaking from Fairbairn puts the spaceship into crisp focus and giving the landscape the slightist bit of blur so that it's obvious that it's much higher up from the ground.  The obvious thing is the manipulation of the landscape, doubled with the position of the the ship, forming the image of the skull, which is utterly, utterly cool, but still not what attracts me to this page.  There's just a great texture here, the lack of solid blacks give the chasm even more detail and definition.  Just an impeccable piece of art.  I stared at this for 5 minutes before moving on with the story.

Another thing to note, though, is how the physical comic page compares to the digital.  I pulled the above image from a preview of Nameless #3 on line, while below is a quick picture I took... 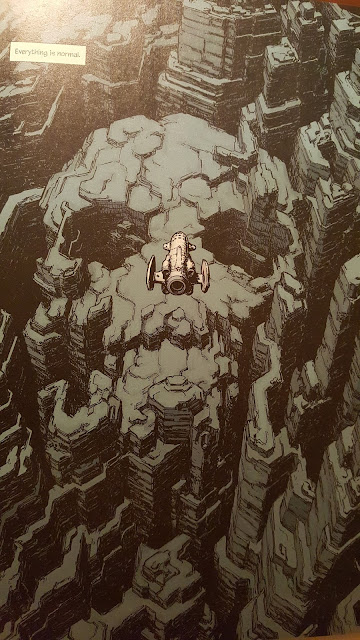 Notice the difference in colour on the printed page (and washed out a little more by some artificial lighting and the extra layer of a camera), but it adds a bit more warmth to the image, a further roughness to the terrain.  The grain of the paper gives it added texture, and in my opinion it looks far, far better, even as a crappy photograph with light flare in the top corner.

There's a reason why I haven't gone digital.  It just doesn't resonate the same.  It like watching TV that auto converts programs to high def.  It still works, but it doesn't look as good somehow.  There is such a thing as too clean, too clear, too crisp an image.  Texture gives images and story more life.
Posted by KENT! at 9:05 AM No comments: