Getting to Know…Our Family pt. 2

Wow! The response to my little sister’s answers was amazing. You guys seemed to want more. Good thing too, because we have a whole week of this. Next up, coming to you from the Great White North is Graig, who wrote this pretty awesome opening so I will just let it stand.

Preamble:
The intent was these questions were supposed to be asked of our significant others in most cases, however, my wife being as great, if not greater comic geek than I (as well as an ace home player of Jeopardy and a master Trivial Pursuitist), these questions would pose no challenge for her. Instead, I decided to ask my 6-year-old stepson, JJ, who has been more than indoctrinated into superhero culture, having watched often the Batman and Superman Animated shows, Fantastic Four, X-Men (the old X-Men Evolution and the new Wolverine and the X-Men), Teen Titans, Justice League Unlimited, and more. As well, he reads regularly Tiny Titans, Franklin Richards, Super Friends, and was a big fan of Teen Titans Go! and Justice League Unlimited comics. I also have found him a bunch of DC Digests from the early 80's which he doesn't enjoy nearly as much.

Stuck in his bathtub so he can't run away, my wife and I corner him and force him to "help Graig with his homework". I asked him directly the questions, while my wife, caring mother that she is, wanted to see her son succeed (and probably, as a point of geek pride, and get the answers right). She occasionally tried to lead him or clarify for him [Ben: I put her comments in orange] while some of JJ's actions are in parenthesis. At first he was acting shy, and saying I don't know a lot, but we coaxed honest answers out of him. By the end he was begging for more. He quite loved doing this. 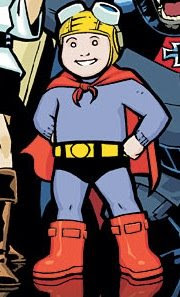 Q: "Where do Spider-man's webs come from?"

Q: What is Magneto the master of?"

Q: "What holiday does Luke Cage think is sweet?

Mom: What's your favourite holiday?
(He rolls a toy truck around the rim of the tub.)
Mom: Use some words...
JJ: Christmas!

Q: How many Robins have there been?

(After my wife explains to him what the question means, a lightbulb flashes above his brain...)
JJ: There's the real Robin, then there's Cyborg that dressed up as Robin, then there's Beast Boy, and Starfire too.. .I seen it in the show. [he said referring to an episode of the Teen Titans cartoon]

Mom: "So four, in other words... which is technically correct" (my wife says, insisting Stephanie Brown counts a real Robin)

Q: Who is Green Arrow married to?

Q: How far into the future are the Legion of Super-Heroes?

JJ: Look out the window.

(They don't really say his secret identity in Teen Titans)

Q:"What is The Thing made of?"

JJ: Easy, go look outside...
Mom: That's the same answer as the Legion one. What's your answer?
JJ: Look for the driveway...
Mom: He knows the answer...
JJ:Look, all of us walk on the driveway everyday. He's made out of our driveway.

(He just rhymed off a random sequence of numbers here)

Q: What is the Thing's favorite 'time'?

(pantomimes punching... after much leading we draw out "Clobbering Time" from him.)

JJ: Why does he say that?

(we have to explain to him, yet again, what a battle cry is after having just done so at dinner the night before, when I cried out "Spoon" before tucking into my meal.)

Q: What mood do you not want to see Bruce Banner in?

JJ: (Roars) I declare this crime is not right!
Mom: What does that mean?
JJ: That's what I'll say when I get mad.

Q: What animal does Mary Jane Watson like to call Peter Parker/Spider-Man?

Q: How many claws does Wolverine have?

JJ: Three on each hand [he says declaratively]. I watch all these programs.

Q: When Billy Batson says 'Shazam', he gains the attributes of six legendary figures. Which figures, what attributes?

(As he thinks of his answers I can hear my wife processing the question under her breath, starting with "I don't know if I can even do this”)
JJ: Um... power, strongness, protective...ness, only say the word when there's danger, and Shazam stands for turning into Captain America (at which point he and my wife have an argument over whether it's Captain Marvel or America he turns into).

Q: "Where do Superman's powers come from?"

JJ: Kryptonite!
Mom: No that's what takes his powers away.
JJ: Red Sun! Remember in the one show where all the villains join together and zap his house to the moon and there's the red sun?
Mom: Nnnooo...
JJ: Remember, and there were like those 20 wolves and he had to use just like those things on the moon, and remember that instead of flying he'd have to drive that red car, and that red car also takes his powers away, because it's red.


Q: "What is Superman's secret identity?"

JJ: Peter Parker... oops.. that's the guy we just watched (referring to our imported from the UK DVDs of "Spider-Man and his Amazing Friends" of which we watched a few episodes before bathtime)... Bruce Wayne?
Mom: No, that's Batman.
JJ: CLARK KENT!

JJ: K... K...Karypten... kryptoton?
Mom: No, that's where he's from but where does he work
JJ: METROPOLIS! In the big building with the globe on top.

Q: What about Batman... where does he live?

Q: "What is the only thing that hurts Superman?"

JJ: If he shrinks...
Mom: Now you're just being silly
JJ: (he starts pretending the remains of a pear he's just eaten is taking away his energy) ach! Kryptonite.

Q: What is the name of Superman (or Spider-Man)'s girlfriend?"

Q: What weekly comic does Judge Dredd regularly appear in?

Q: What is Alfred's surname?

JJ: Cable? Oh, that's easy. [He does a song and dance...] "you see it outside, you see it on your tv" [and he sings way too much too fast for me to keep up, about many things plugging into many other things]

JJ: Stephen! Stephen Harper! The guy that we're voting for!

(point of note for my American friends... Canada has just undergone a national election as well, with voting on the 14th of October. Stephen Harper is the Conservative Party leader and current Prime Minister of Canada, and I'm 95% certain he's a lizard alien from "V")

Mom: Heh. No Steve Rogers is Captain America... and we're not voting for Stephen Harper.
JJ: I know who I'm going to vote for...
Mom: You're not old enough to vote.
JJ: Well I'm voting anyway... for JOHN MCCAIN!!!

(He pounds a fist in the air and jumps up and down in the tub. We explain to him that he's not old enough or American enough to vote, and he tells a long elaborate story about how he's going to go down and vote for John McCain because he says "Hi my name is John McCain" on one commercial he's seen and though was hilarious.)

Q: Which super-group is from the distant future: the Avengers, the Fantastic Four, the Legion of Super-Heroes, or the Justice Society?"

JJ: The Super Friends? Fantastic Four.. no nonono... I mean the Justice League, I mean no. no. no. (Starts hyperventilating) LEGION of Superheroes! That really got me buggin'.

(They don't even have it right in Spider Man and His Amazing Freinds, they called him Dexter Von Doom)

JJ: Purple, with no shirt. And he has a green belly and a green bumbum.

Q: Do superheros ever kill?

JJ: They kill 20 days. In my life that's a horrible word. They should get sent to court. Don't ask any more questions with that word in it or guns. No killing or guns questions again.

Q: What comes with great power?

These are hilarious, marred only by the fact that I have one friend who is voting for McCain for essentially the same reason.

I declare this crime is not right!

I can't think of a better battle cry than this!

DC should hire this kid. Because Batman should live in Goat Town, and I liked his answer on Superman's power source.

Why does Lufor have women serve him? Ah, so young. So young.

This is possibly the greatest interview of all time.

Stephanie Brown does too count as a Robin!!

Uh yes, anyway, I'm very proud of my boy for getting some of these answers. We're raising him well, except for that whole voting for Stephen Harper thing...

No, this kid should work for Marvel.

I would totally buy a Dr. Doom, Society Scientist ongoing.

Just the idea of a villain protagonist in an iron mask and green cloak clutching test tubes at a fancy gala is comics gold.

I formally apologize for asking the "Shazam" question, but for someone of my vintage, this was completely common knowledge due to the live action "Shazam!" series on Saturday mornings. I still hear the narrator booming out "Solomon! Hercules!" etc. any time I find myself listing the six legendary figures.

How about a Dr. Doom, Society Scientist and Alfred Pennywhistle team-up book! It'll get better numbers than Secret Invasion!

Yes! Your blog is great, and I know something about the night elves, they are the race I WOW power leveling when I get my first account:The reclusive Night Elves power leveling[ were the first race to awaken in the World of Warcraft Power Leveling. These shadowy, immortal beings were the first to study magic and let it loose throughout the world nearly ten thousand years before Warcraft I. The Night Elves' reckless use of magic drew the Burning Legion into the world and led to a catastrophic war between the two titanic races. The Night Elves barely managed to banish the Legion from the world, but their wondrous homeland was shattered and drowned by the sea. I love this race and suggested everyone that start their WOW power leveling a rogue or druidof night elf