Caillou is an insufferably precious, balloon-headed bald kid whose parents treat him like he's exceptionally fragile, as if he's going through chemotherapy or something (would explain the baldness).  I swear they break down crying every time time they're not in the room with him.  The narrator of the program talks in that manner as if she's about to break out in a chuckle all the time, and it grates on my goddamn nerves... but not as much as the theme song, which I can only stomach when I pretend it's David Cross singing it old-school broadway style, wearing a beanie cap and painted on freckles.  Worse still, it's bloody infectious, one of those earworms that crawls inside your brain and makes a home.

Don't know what I'm talking about?  Here you go, listen at your own risk.

Anyway, what's the point?  Point is this: 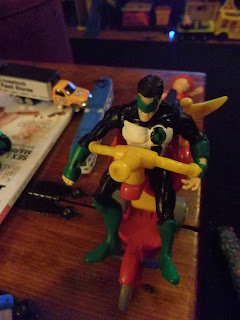 Kyle Rayner is no fan of Caillou.  He straight up bum rushed that Hector Hammond-looking kid off his fireman Big Wheel and is gone, baby gone, singing his own damn version of the Caillou theme song:

I'm Earth's Green Lantern number four,
once the only one but now there's more,
including a dog named G'nort,
I'm KyleRayner

One night I drank too much and had to pee,
wandered into a back alley,
that's where the ring found me,
I'm KyleRayner


Found my girlfriend in a fridge and joined the JLA...
but my ring keeps slinging, creating new shapes...

This space cop thing is not so tough,
but that Black Lantern thing was kinda rough,
and Hal Jordan can suck my nut,
I'm KyleRayner, KyleRayner, I'm KyleRayner... That's me.

Q. Hasn't everyone talked "The New 52" to death yet?
A. No!
Real A. Well, maybe.  But I'm still more than a little fascinated by it all.  It's like pilot season each fall, only I doubt that, with all the channels combined, there's even 52 new TV shows being rolled out this season.  We've been doing a sort of mini-coverage of the Fall TV pilots on (one of) my other blog(s) "Graig and David Sometimes Disagree (about movies and other stuff)" and there, like with "The New 52" I've gotten suckered in to sticking with shows I didn't think I'd like, left disappointed by others I thought would be better, forcing myself to stick with some that have potential and/or talent I generally find appealing hoping they'll get better, and had my suspicions confirmed on many that they're just as bad as they appeared.

With "The New 52", I've picked up a total of 28 titles, six of which I hadn't originally intended to pick up but either got intrigued by the word of mouth (Animal Man, I, Vampire, Demon Knights) or was drawn in by some fanboy attraction (Justice League being the first of the new 52, sheer curiosity over Superman, and a serious appreciation for Keith Giffen as an artist on OMAC).

For my own edification and perhaps your amusement, I will now go title-by-title with a very quick synopsis of my feelings on each ("DNB" denotes "Did Not Buy")

Justice League - will read digitally through the first storyline, but not really all that enthused so far

Week 1
Action Comics - I'm in as long as Grant Morrison is, because I'm a Morrison fanboy
Animal Man - the first issue was indeed as great as everyone said it was. I'm sticking with for a bit.
Batgirl - Charmless, dropped.
Batwing - (DNB) wasn't interested, liked the artwork from previews but still not all that interested.
Detective Comics - (DNB) don't really care for Tony Daniel's writing, and the much touted "shock ending" only pushes me away more.
Green Arrow - (DNB) no interest, reviews have left me with no interest
Hawk and Dove - (DNB) Liefeld
Justice League International - (DNB) despite being a huge minor character buff, this title has no interest to me (mainly due to the uninspiring creative team)
Men of War - a fairly solid book but unfortunately saddled with a back-up feature. Sticking with it for a while.
O.M.A.C. - Giffen's artwork is delightful, but it's just not resonating story-wise.  I'll give it a couple issues.
Static Shock - It's not great, but I like Static so much I'm sticking with it in hopes it gets better.
Stomwatch - I like Paul Cornell but Stormwatch's narrative structure is a mess, but if it gets corrected it should be really good.  Sticking with it for the first storyline.
Swamp Thing - (DNB) I've heard it's good, and I like both writer and artist, but I'm just not a big Swamp Thing fan.  Maybe in trade?

Week 2
Batman and Robin - (DNB) wasn't thrilled with Tomasi and Gleason's previous B&R work so I avoided.
Batwoman - great looking, obviously, but surprisingly good reading too. Long haul.
Deathstroke - (DNB) no interest at all
Demon Knights - I don`t really get into the whole medieval thing often, but I quite liked this.  I`ll stick with it through the first storyline at least.
Frankenstein: Agents of S.H.A.D.E. - it`s out there and friggin fantastic. Long Haul
Green Lantern - I`m not sure if I`m bored of Green Lantern yet.  I`ll give it a couple months.
Grifter - I loved the first issue (though strangely a lot of people loathed it).  I`m with it through the first storyline, and hope it can carry the goodness beyond that.
Legion Lost - (DNB) I don't think a second legion book was necessary (especially considering how disruptive it's been to the first book). Not now, not ever.
Mister Terrific - I so want this to be good, but it's really not.  A new artist might go a long way to salvaging it.  I'll read until it's to painful to continue (which by my estimation is 2 more issues)
Red Lanterns - (DNB) no interest
Resurrection Man - the first issue wasn't perfect, but it was good enough for this old fan of the original series.  Long haul.
Suicide Squad - I wasn't expecting to like it, but, art aside, I thought it was awesome.  Long haul.
Superboy - (DNB) looked painful, so I skipped it.  Heard it wasn't too bad, but that's not inspiring me at all.

Week 3
Batman - this was the best of the best of the New 52.  Pure entertainment with pointy little ears.  I'm on as long as Scott Snyder is writing.
Birds of Prey - (DNB) I'm keeping my eye on this one but not ready to add to the pull list yet
Blue Beetle - Not too bad, but nothing great or even all that different from the last Blue Beetle series.  One more issue before I decide yea or nay.
Captain Atom - the first issue was more boring than a first issue should be but I'm giving it another issue or two to turn itself into something worthwhile, but not holding my breath
Catwoman - (DNB) look, I like sexy lady drawings as much as the next guy, but this just doesn`t seem right.  Not for me.
DC Universe Presents - (DNB) I`m finding the recent spotlight on Deadman has made him far less interesting to me.  I`ll see what the next DCUP arc offers up and the one after that, and the one after that.
Green Lantern Corps - (DNB) I hit GL exhaustion point after Blackest Night, so no interest
Legion of Super-Heroes - I like the Legion quite a bit, but the first issue was so terrible it`s absolutely soured me on them for the time being. Dropped.
Nightwing - the wife wasn`t completely turned off by the new series, so it`ll keep getting picked up until she tires of it.
Red Hood and the Outlaws - (DNB) no thanks
Supergirl - I liked this more than I think anyone did.  I`m in with Kara a good long while, or maybe until the creative team changes.
Wonder Woman - okay, I`m digging this.  I`ll be around a while to see where it goes

Week 4
All-Star Western - (DNB) heard it`s pretty good.  I`ll keep my eyes on the reviews and maybe pick up the first arc in trade if it holds up.
Aquaman - good enough to pick up the next couple issues, but we`ll have to see from there
Batman: The Dark Knight - (DNB) I`m satisfied with just one Batman title a month, thanks.
Blackhawks - I was excited for it and seriously let down.  I`m not giving it a second chance.
The Flash - (DNB) Looks pretty but I`m still holding out for Wally`s return.
The Fury of Firestorm - (DNB) skimmed through it and it looked awful, which reviews have confirmed.  Poor Gail.
Green Lantern: New Guardians - (DNB) I was thinking about picking up this one because I like the lantern spectrum concept, but I heard it wasn't great so I'm passing for now.
I, Vampire - I'm so bored with vampires, but I was shocked by how great the first issue was.  I'm into it, at least for now I am.
Justice League Dark -  It was an entertaining enough read, I'm not sure it's my thing though.
The Savage Hawkman - (DNB) see Detective Comics
Superman - I'm torn, I kind of liked it but kind of didn't.  The fanboy in me wants to know about the Superman of the new DCU, but I'm not sure if I'm really all that interested.  I'll give it another issue and see.
Teen Titans - (DNB) I'm still so miffed that DC finally got the Titans back on the right track and now they offer this crappy looking reboot.  No thanks.
Voodoo - (DNB) reviews were surprising, though not overwhelming enough to get me on this book.  If it's worthy I might try in trade.

The books of the New DCU are already being threaded together.  With Madam Xanadu appearing in both Demon Knights and Justice League Dark, with mentions of the larger superheroics of the DCU in disconnected titles such as I, Vampire and Men of War, and crossover companies like Cadmus in O.M.A.C. and Superboy, not to mention the thematic return of super-science in so many of the titles.  Static is sharing New York with Hawkman and Captain Atom, Wonder Woman is about to battle some gods, and Circe just showed up in Men of War.

There are tendrils strewn throughout, and while it is making the shared universe seem really big, it's perhaps over-connected, and with 52 titles and all these new and used heroes cropping up in a 5-year span it actually seems somewhat overwhelming.  As well, I'm not sure seeding the "shared universe" so heavily is a good idea to keep new readers interested in the titles they've picked up.  I know even as a reader of half the line-up I don't want to feel forced into reading anything more just to understand what characters are talking about.

It's only a matter of time before the crossovers and guest-stars to start happening (I believe there's one scheduled already for October) but I think each of the books (well, those that aren't sharing space or characters with other books) should have room to breath and develop on their own first.

Back to the Fall Pilot Season comparison, I read today that NBC's The Playboy Club has already been axed three episodes in.  While it's rare for comics to nix a series before its tenth issue, it may happen with more than a few of these books and in rapid fashion.  Obviously some books, like anything Batman, Superman, Green Lantern and Justice League are safe, but others may not fare so well despite quality.

Here's my chopping block predictions for the first two years:

DC has now flung their poop at the wall, so I guess we'll have to see what sticks, what stinks and what surprisingly smells like roses.
Posted by KENT! at 7:15 PM 1 comment: