Catching up on Comics with CGraig: The Unbeatable Squirrel Girl #2-4

This is perhaps my favourite ongoing title at present, and already an all-time favourite.  It's comic book perfection.  Reading Squirrel Girl gives me the same giddy sensation as when I read the Giffen/DeMatteis Justice League back in the day: just flat out love for the world and its energy, and utter appreciation of the craft of fine comic-booking by Ryan North and Erica Henderson.  USG is clearly the result of people who love what they are doing, and it shows especially in the liveliest letters pages this side of Saga. Truth was when this book started this wasn't the Squirrel Girl I was hoping to see, but it took North and Henderson all of a few pages of its first issue (not even the whole thing) to sell me on what they were doing. And when Marvel started canceling books in the wake of Secret Wars I was so worried that USG was finished.  But if three pages of letter columns in this second volume tell me anything it's that there are more people out there like me who love this book (and more who love it even more than I do). Also, it legit makes me laugh out loud, a lot. These opening "recap" pages (typically in the form of a Twitter-style scrawl, usually featuring Squirrel Girl prodding Tony Stark on one thing or another) get things started off right, every time.

They changed things up for this latest arc as Doreen is trapped in the 1960 with Dr. Doom (the very same Dr., Doom who is still reeling from his first encounter with --and loss to-- SG) playing Marvel U's Aku (Doom is LAW) and attempting to take over the world... 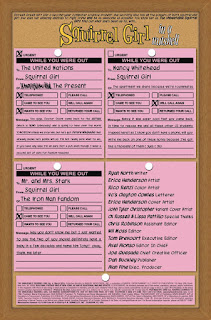 ...and by all appearances succeeding. 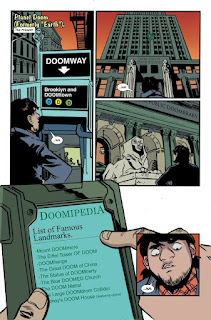 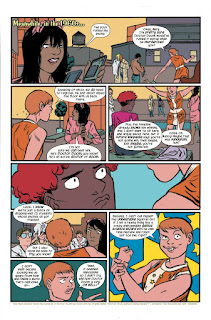 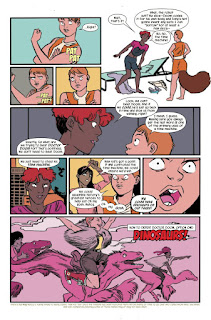 Don't worry, her actual plan (come issue 5) is even more awesome than riding dinosaurs.  How great is Erica Henderson?  That Rosie the Riviter panel is just the bomb, and the four panels that follow, comedic genius.

BONUS! Variant covers I don't own but wish I did!

Catching up on Comics with CGraig: The Life After #6-10 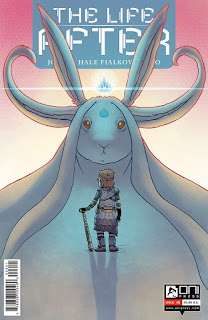 I was into the weird Matrix-esque digital Heaven/Hell/Purgatory that Fialkov and Gabo presented in the first 5 issues of The Life After.  It was overseen by a weird bureaucratic environment (reminiscent of the control room in Cabin in the Woods) that was teased out nicely.  As well how it related to the central character's journey wasn't well defined.  The main character was a Neo-like chosen one who began to discover he could manipulate the system in weird ways, but didn't know what it meant nor how to use it effectively.  He also had Ernest Hemingway as a companion in his journey through the afterlife.  It was weird, but not in a cutesy or quirky way.  It's a pretty serious book with some heavy themes, but not without its comic relief (mostly in the form of Hemingway).

Issues 6-10 act essentially as a volume 2, but expand the focus beyond the main cast, to see more of the inner workings of the afterlife office, and toy with roughly defining the rules of the afterlife so that characters can break them.

Were the first five issues a miniseries and the second a follow-up miniseries, I'm almost certain the book would have a tighter focus on the main characters, and their navigation of the realm.  But as a continuing story it loses that focus and feels a liitle too meandering and explanatory.  I still liked it, don't get me wrong, but this second act didn't quite deliver as effecting a story as the first.
The ending parallels sharply with the beginning, only with ten issues of context behind it.  It's a tactful stroke on Fialkov's part and illustrated deftly by Gabo.  Another act came in November (Exodus)... which is good because it leaves a few things hanging... more than a few actually.  I hope it doesn't get too explanation heavy of the after-world.  I like the vagaries. I'll have to track it/them down.  I kinda overlooked them.

In the Secret Wars-induced hiatus of Spider-Woman -- in which the series, only 10 issues long, was cancelled and relaunched a few months later with a new number one -- series artist Javier Rodriguez seemed to find a new sense of artistic self.  It's not like it's a drastic shift in style, his figure work doesn't look radically different, nor is there a drastic change in his background work, and his layouts for the most part, are conventional...but every few pages Rodriguez lets the beast out and his pages are delirious things of mad ingenuity, pushing perspectives like Steranko or constructing panels with a J.H. Williams III-like virve. He's a man in transition, and once he figures out how to feed his creative drive while also servicing 20 pages (or more) of story, we'll see something strikingly unique and very impressive.

(I'll figure out decent picture taking in some other lifetime) 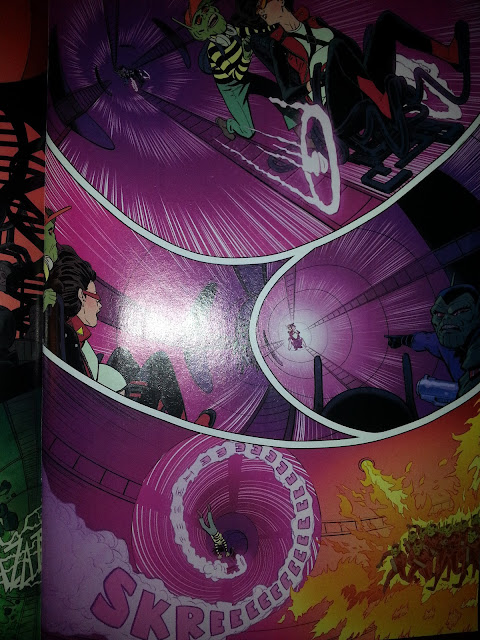 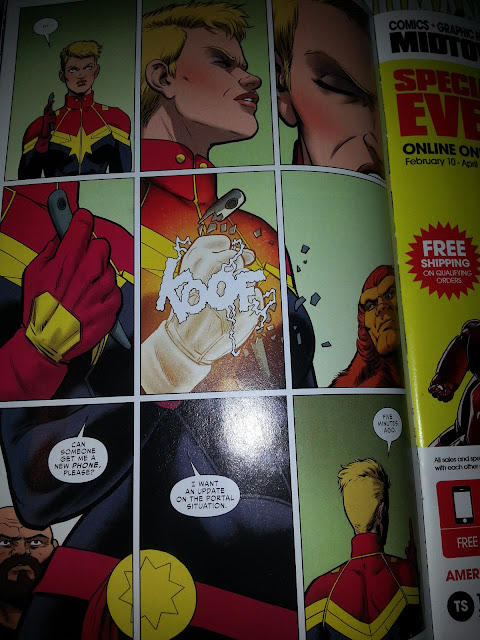 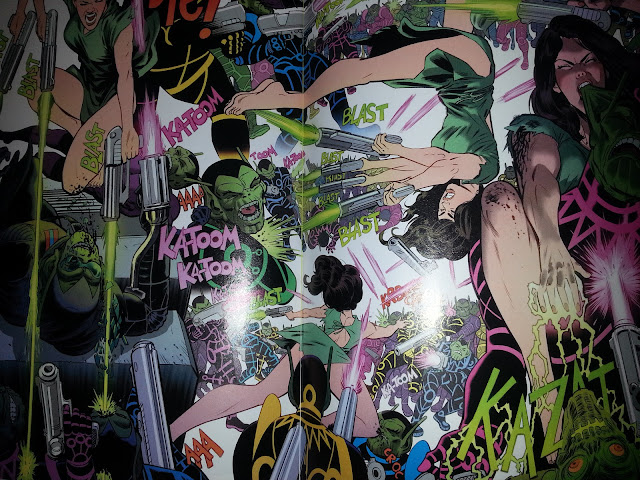 Catching up on Comics with CGraig: Spider-Woman #2-3 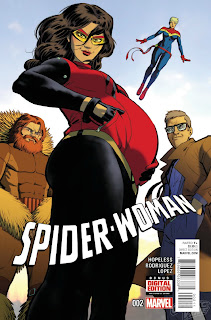 I find it interesting that Spider-Woman is now more affiliated with Captain Marvel than Spider-Man these days (note the good Captain's positioning on the covers of 2 & 3... particularly in the logo of #3), but then again Jessica has been fairly independent from Peter's affairs almost from day one.  In fact, it usually seems weird when the Spiders Man and Woman collide.  Unlike Supergirl or She-Hulk who are gender analogues to a certain extent of their male counterparts, Spider-Woman has a very broad breadth of distance to be her own thing.  It was more in the Ultimates universe where the quasi- transgendered Spider-Woman worked as an Agent of Shield and mentor to Miles Morales (didn't read any of the Ultimate Peter Parker run, so I'm  not sure how much she factored into his life... though I suppose she'd be fairly closely tied being a genetically manipulated clone of Parker).

I get the feeling that with the post-Secret Wars relaunch of the title Marvel is taking the opportunity to kind of make Jessica Drew more like Jessica Jones, given the popularity of the Netflix series and the otherwise nominal cache Jones has in the comic book world).  Though strangely,  they're making Jessica Drew more like the comics JJ than the TV one.  Then again, Jessica Jones was originally intended to be Jessica Drew before Marvel brass had second thoughts about putting a Spider-character in as the lead of an adult-themed book. 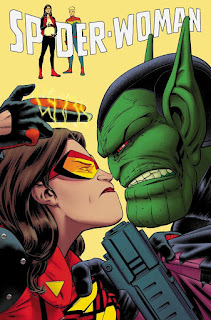 Just like JJ, Drew is a private investigator, she's best friends with Carol Danvers, and now she's pregnant, which is a notable comparison because not many people get pregnant in comics (can we get a run-down of all the knocked-up superheroes in comics history please?).

We've skipped past conception and the first nine months to find a bursting-at-the-seams Jessica in an intergalactic birthing hospital (at Carol's insistence)... which just so happened to fall under siege of some Skrulls just after she arrived.  Jessica has history with the Skrulls so no matter how pregnant she is, she's not just going to sit by and let the dimple-chinned freaks get away with...whatever they're doing (she doesn't really care all that much).

She has to make her way through the hospital at one point,  which finds her intruding on some other patients unintentionally...and Javier Rodriguez really gets to let loose creatively here, with a trio of pages that would make Kirby and Ditko pause fro a moment.  I could go for a whole issue of pin-up pages of Rodriguez's vision of this alien hospital. 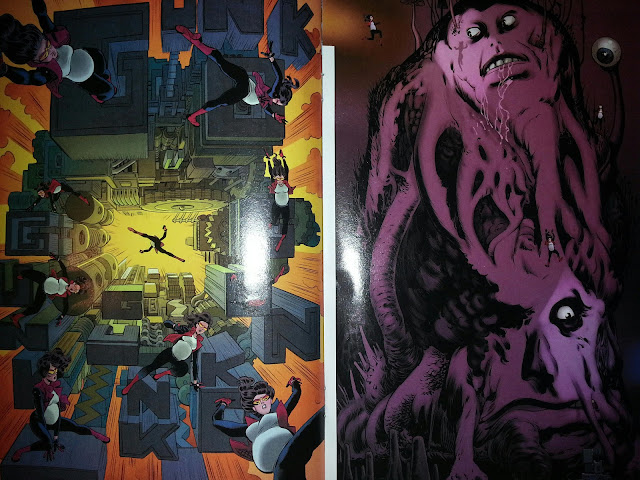 Catching up on Comics with CGraig: Annihilator #1-6

My esteemed colleague Adam X over at Thor's Comic Column on Bleeding Cool has a bit of a distaste for one Mr. Morrison.  We've had many a heated behind-the-column discussions about said Mister, discussions which see the whole crew chiming in on the pro-GrantMo side of things, with poor Adam sitting squarely (and vehemently so) on his side of the camp.

Not to put words in his mouth (which is something someone says when they're gonna do just that) but the gist of Adam's POV was a general dislike of Morrison's recurring tendencies, such as recycling the deeper wells of comic lore and passing it off as something groundshakingly new or Morrison's penchant/overuse of metatext.

I shudder to think of Adam's reaction to reading Annihilator, then, as I'm quite sure it would be some fairly horrifying crime against the physical book itself.  Annihilator feeds Morrison's meta demons a gluttonous buffet, all with a tart foundation of that hoariest of meta-cliches where an author meets the character he's writing in the flesh.  It gets worse... it's not just an author, but a celebrated Hollywood bad-boy screenwriter.  If this were a movie, it would be insufferable by minute five.  As it stands as a comic it's barely palatable the whole way through.

I have to say that I was looking forward to Morrison's editor stint over on Heavy Metal this year, but if this is what he's looking at for sci-fi (b-grade 90's Tarantino knock-off edginess blended with Barbarella-level space opera) I'm gonna take a hard pass.  I haven't been this disappointed with Morrison since The Filth...in fact if I'm more disappointed it's because it feels like a waste of effort for one of my all time favourite artists, Frazer Irving.  Oh, don't get me wrong, Irving's work is dazzling as always, but it's a rare instance where Morrison doesn't play enough into his artist's strengths.

Think of the world building Irving did in (the lamentably still incomplete) Gutsville that is utterly missing here.  He gets to create a whole other dimension but spends precious little time in it.  The majority of these six extra sized issues are talking heads.  Irving does a good jib with all of the drama, melodrama and comedy but it doesn't let him shine.

Tonally Annihilator is a bit of a shit show, not balancing it's weirdness with anything resembling likeable characters.  The weirdness of the alternate dimension never fully solidifies into anything tangibly exciting while the earth-based situation is such a microcosm that it's like the four or five characters live in a solitary LA almost solely inhabited by, and centered around them.

I was going to say that Mr. Robot's Rami Malek would be perfect for the role of Ray Spass but then I have no desire to see this translated onto the screen of any size.  It's not a terrible book, but by Morrison's standards it's about as low as they come.  I'm certain I'm missing a lot of dept and subtext and innuendo and literary/pop-cult references and all sorts of other jazz that Mr. M likes to seed into his work, but with Annihilator it's just not worth the effort of digging in that deeply.
Posted by KENT! at 11:54 AM No comments: