Versus 3: Suicide Squad vs Thunderbolts

Okay, so the Suicide Squad was a riff on the Dirty Dozen and the Thunderbolts, at least what I've read of them (the Ellis and Diggle runs), are a riff on Suicide Squad. But pitting the Ellis team versus classic Squad members, who would win?

Behind the scenes. The Squad has Amanda Waller, while the T-Bolts have Norman Osborne. 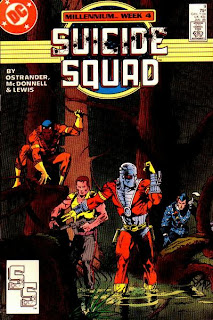 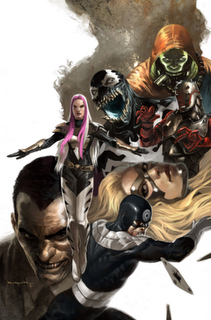 Who takes on who, and who wins?
No editorializing. I'm leaving this up to you folks to decide.
Posted by KENT! at 2:34 PM 5 comments:

They are and quite frankly, always will be, the standards to which others are held to.

Dick Grayson, when he donned the Robin costume, became a first in comics; the teen sidekick.

Soon, he was followed by others but none had more of an impact than James "Bucky" Barnes, sidekick to The Sentinel of Liberty, Captain America.

The years passed have brought great changes to both. 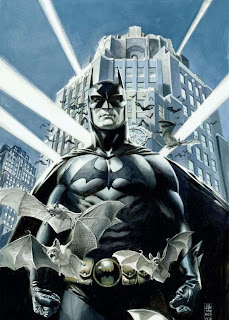 Dick Grayson was allowed to age, eventually becoming leader and co-founder of his own team, The Teen Titans while also becoming a skilled crimefighter, martial artist and master detective. Deep divisions formed in the father/son relationship of Batman & Robin, prompting Grayson to embark on his own path as Nightwing. Following the recent death of Bruce Wayne, the time came for a successor and the choice was a clear and easy one: the student has become the master, leading a new Robin on a path pointing towards adventure. 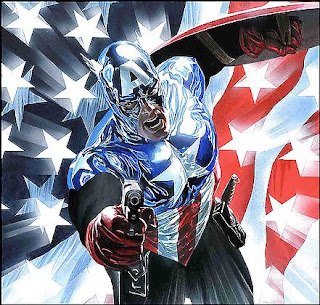 Bucky was the ultimate Marvel sidekick, smiling, full of promise. Bucky, while fighting The Axis with The Captain, went on to form his own group of junior crimefighters, The Young Allies. At a crucial point towards World War II's end, Bucky and Cap, in an attempt to stop a Nazi experiment, sacrificed their lives in doing so. Bucky was given an honor few comics characters in death received: he was allowed to die and stay dead, a hero. That was until The Winter Soldier Saga where we learned that Bucky had never died and had spent The Cold War years as a pawn and assassin in the thrall and service of the Russian government. Bucky with help from Nick Fury and Iron Man was later liberated and set on a path that led towards what was once theunthinkable; Bucky Barnes living to become Captain America.

So, Second Printers, knowing what's become of these two former sidekicks turned mantle bearers, in a knock-down-drag-out, who would walk away "The Man?"
Posted by Devon Sanders at 1:30 PM 5 comments: 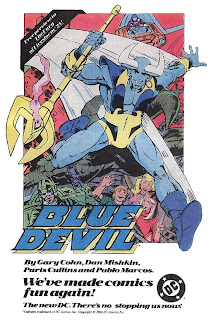 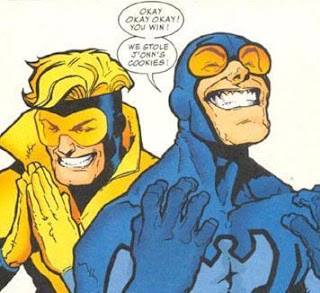 NO YEAR END WRAP-UPS, NO "BEST OF'S THE YEAR OR DECADE."

Because we respect your time too much.
Posted by Devon Sanders at 3:48 PM No comments: 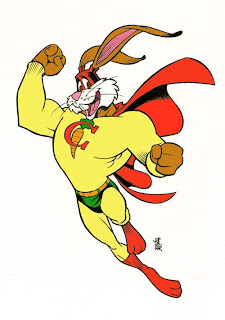 So, Second Printers, who would emerge victorious from this "Crisis of Infinite Furs?*" (See what I did there? It's a play on words. *heh* Genius. )

*Count yourselves lucky I didn't go with "Crawfish of Invertibrate Furs." 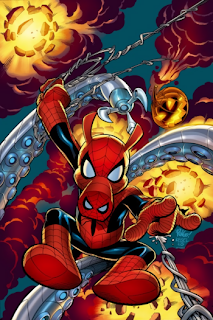 Marvel's Mephisto and DC Comics' Darkseid team-up to take over everything.

Marvel's The Watcher and DC's Lords of Order can only send one team to champion the cause of good.

Who will it be?

Batman: The Darknight Detective; master tactician, trained in mind and body to, quite possibly, be all that is humanly possible.

Superman: The Man of Steel; heralded as THE most powerful and resolute of DC's superheoes, he's played a major hand in the salvation of the universe many times over. His will to keep his adopted home safe from harm is matched only by his frequent ally...

Wonder Woman: The Amazing Amazon; daughter of the Greco-Roman pantheon of gods, she's easily one of the DC Universe's most powerful characters, she also may be its most well-trained superpowered hand-to-hand combatant. Has shown a willingness to make the hard decisions the other two simply couldn't.

Captain America: The Sentinel of Liberty; due to enhancement from the Super-Soldier Serum, he is the ultimate soldier and the Marvel Universe's go-to tactician, possessing a will and instincts hardened through numerous battles and wars.

Iron Man: The Golden Avenger; Tony Stark, futurist and genius inventor of one of the Marvel Universe's ultimate weapons, The Iron Man armor.

Thor: God of Thunder; centuries old god-warrior, possessing a strength matched by a very, very few. It was with his name on their lips that many a warrior would ride off into battle.

So, Second Printers, the question is: Having to choose, who would YOU want to champion the fate of all, DC Comics' Trinity (Superman, Batman & Wonder Woman) or Marvel's Big Three (Captain America, Iron Man & Thor)?
Posted by Devon Sanders at 8:05 AM 10 comments:

Don't worry, we've got new posts in the works but today I need something from you:

I have nearly 1,000 comics I just need gone! Don't wanna sell 'em. Don't wanna do eBay. Children's hospitals most likely won't take them and I don't want to recycle them.

I need room and just want them gone with the least amount of processing and mailing possible.

Any organizations you all know of that'll take them off my hands? And can it be counted as a tax-deductible donation?

Any help would be awesome.

Thanks in advance!
Posted by Devon Sanders at 1:19 PM 7 comments:

You're a nobody with a big secret.

You're on the run and THEY know who you are.

You were the wrong person at the wrong place and now they are coming after you. If what you saw gets out, a chain of events unlike any other will come about.

The fate of two universes is in your hands. Reputations will be ruined, empires will crumble.

IF you live long enough to tell the tale.

THEY are after you, the ones who work to keep the type of secret you know amongst THEMSELVES.

You need to tell someone the truth. The truth about what you saw, what you heard.

So, my question to you Second Printers is this: Who would YOU choose to be the person answering on the other end?
Posted by Devon Sanders at 2:17 PM 9 comments: