Two hours ago, I heard of the passing of writer/creator Dwayne McDuffie. I, like many, am incredibly sad.

McDuffie had, over the years, become something of a mentor to me. He had no idea, though. 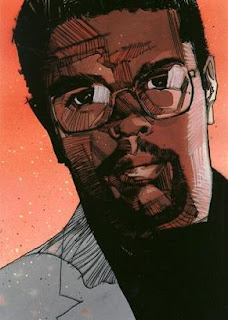 I'd first discovered him as the writer of Marvel Comics' Damage Control mini-series. In an era when every creator seemed to be taking comics by the hair, kicking and screaming, down a dark alleyway, here was this... thing. This very funny... thing. A comic that asked and answered the answer, "Who's gonna clean up this mess?" It was brilliantly written and vibrantly drawn and honestly, a breath of fresh air in an industry hellbent on becoming hellbent. I wanted to write like this man. I wanted to make people feel good about the comic they'd just read.

Later, tired of the Luke Cages and Night Thrashers of the comics universe, he co-created Milestone Comics, a brand formed on the knowledge that characters of color and even different sexualities could and should have just as many chances at heroism as anyone else. From this, we got The Blood Syndicate, The Shadow Cabinet, Xombi and the books he personally wrote Icon (and more important to me, his sidekick, Rocket,) Hardware and Static. Static would later go on to receive his own long-running cartoon series. (McDuffie wrote many of its episodes.) As an aside, I honestly believe a whole generation of young black men watching Static Shock on Saturday mornings wear their hair in dreadlocks in emulation of McDuffie's most enduring creation.

McDuffie went on to write many more cartoons, chief among them, Justice League Unlimited, the Super Friends cartoon we wished for as adults. Watching this show was seeing everything you loved about comics rendered big on screen. In each McDuffie script, you just knew he adored the material he was writing about and it showed in every word. McDuffie even managed to do the impossible and in one episode of Unlimited, wrote the best Marvel animated project Marvel never commissioned.

To me, his greatest contribution to comics and to animation was this: I remember looking into the mirror as a child and came to horrible realization that I couldn't truly be Superman. My hair didn't do what his did. My skin did not look like his.

Fast forward, thirty years and my nephew and I are watching Justice League Unlimited together. The room was filled with nothing but the sounds of the television, when my nephew looks over at me and smiles. "The Green Lantern. His head is bald like yours and he has a mustache and hair on his chin like you do. You look like Green Lantern."

I can't tell you how good I felt at that moment. To my nephew and many other children, men who looked like me could be viewed as heroes. I could be a hero. Just like Green Lantern.

Just like one of my personal writing heroes, Dwayne McDuffie.
Posted by Devon Sanders at 3:40 PM 3 comments:

The fight enters it's second hour.

Fifteen minutes ago, Omega Rod and sword were thrown down in favor of fists.

Each fist landing impacts with the sound of a body thrown to the ground from a great height and yet, they will not stop.

Who will fall first? 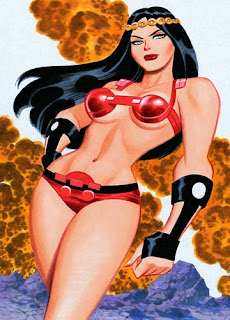 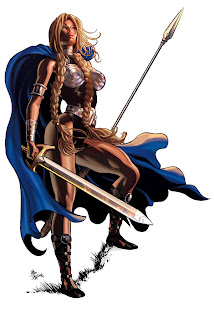 Second Printers, YOU DECIDE!
Posted by Devon Sanders at 7:57 AM 4 comments: 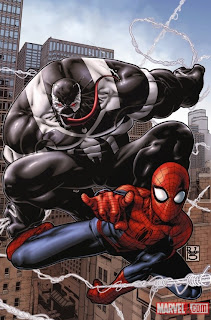 Devon and Graig review some comics over at CHUD.com.
Posted by Devon Sanders at 6:54 AM No comments:

Neither has reached their potential.

Both are destined for great things.

Both could pulverize a mountain in a flourish.

Both are battle tested and battle hardened.

The other was a alien/human hybrid who was born to take over The Earth. He'd reeeally rather not, though. 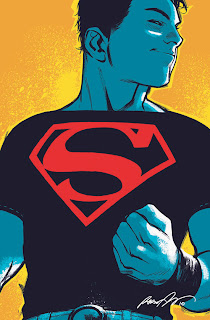 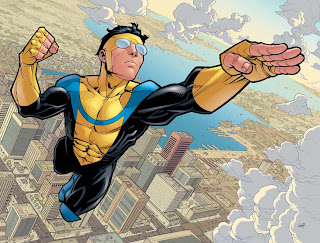 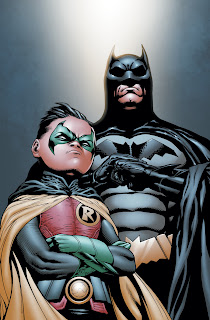 Graig and Devon are back and reviewing comics for CHUD.com.
Posted by Devon Sanders at 11:07 AM No comments:

More NHL Guardians than you can handle

Sunday night at the always lackluster game of shinny that was the NHL All-Star Game, the NHL Guardians made their debut in a 3 1/2 minute true multimedia extravaganza. I had spent the previous week really ragging on the design of these characters, but I have to say that the CGI effort was actually tremendously solid and I think the majority of the characters work better (if they work at all) in the CGI design as opposed to the comic illustrations. See for yourself.

As for the content, well, it's about as engaging as a Super Friends cartoon, in that it's juvenile and patronizing. Devon Dark is as silly a villain name as has been perpetrated in the modern age of superheroes (although I didn't catch all the villain names on "The Cape" during the 20 minutes I could bear watching that show, so there could easily be plenty worse) and the leader of the Guardians decreed as "Mike Mason" in the presentation was equally groan inducing (either that or leading to hockey fans questioning "You mean the Columbus goaltender?" "No, that's Steve Mason." "Oh, so the Atlanta goaltender, then." "No, that's Chris Mason." "So who the hell is Mike Mason?") But damn if there weren't some cool things going on in that presentation... the transformation of the RBC Centre into a giant nondescript weapon of sorts was pretty cool, and the on-ice projected display must have been pretty impressive in person (same technology that was used at last year's Vancouver Winter Olympics closing ceremony I imagine).

With all the Guardians revealed and the big debut at the All-Star Game the Guardian Project website went totally live, and as with their presentation on Sunday, this effort, in fact is generally exceptionally well done (if the nuances are cheesy and/or painful).

Entering the site gives you two options: "The Vault" and "The Chronicles"
The Vault is a visually impressive flash-based interface that boots up what it must be like to sit doing JLA monitor duty. A grid of all the Guardians pops up, with most currently displaying "ALERT: Unable To Locate", with a few others' images appearing but greyed out ("Guardian Not Online"). The Hurricane is currently the only clickable Guardian which leads to an interactive page centering around a CGI display of the Hurricane, with clickable areas to discover his powers, learn more about him, download wallpaper, comics and posters. As well, you can register yourself to the sight and receive "private" messages from Mike Mason about the status of the Guardians if you're so inclined. There's an impressive music score backing the Vault, full of intensity and gravitas. They've made a really great effort, so it's quite unfortunate that everything it hinges upon, the validity of these characters as actual superheroes falls so flat.


"The Chronicles" provides access to some of the elements of the Vault but in a less Flash-intensive setting. But there's more product in the Chronicles at this point, with excerpts from the Guardians novel (yes, apparently there's a novel) providing background on Mike Mason and Devon Dark (I haven't read these excerpts yet, so I'll refrain from comment). There is a 6-page comic (one title/spash page and 5 story pages) for each Guardian scripted by Chuck Dixon but conceived by Jake Shapiro and/or Tony Chargin (presumably behind-the scenes guys at the Guardian Project... Chargin it appears in co-founder of Guardian Media Entertainment and EVP Creative Affairs).

Dixon, a workhorse writer and usually solid and dependable, gives an effort here that is clearly for-hire and passionless, the result being that most of these stories are ridiculously painful to read. It's clear that he was given a list of things to touch on for each character, such as a clear display of each of their powers (and as we've said before, the Guardians are overloaded with powers, like a role-playing game creation session gone horribly awry) and the involvement of city-specific landmarks and/or character attributes for that city that sometimes border on hoary cliche. What was forgotten, or not at all allowed, was character. There's very little distinctive personality from Guardian to Guardian or villain to villain. They're not even cartoonishly fleshed out, because they're not fleshed out at all. Each Guardian reads like the other with awful puns (I imagine Dixon had fun seeing how bitingly painful he could make these puns) or beyond cliche closing sentiments ("Whenever I'm needed, Sabre will be there.").

The purpose for each story is to show a previous adventure each of the Guardians have had, and they're all stock golden-age style plots: villain up to no good, hero intervenes, the end. There's nothing to say that one hero is more of an adventurer than the other or that any of them have secret identities or that they're interested in anything but lame jokes and foiling poorly constructed villainous plots.

If you tally it up, there's 150 pages of story here. It would have been brilliant to give Dixon free reign to write his own adventure(s) to fill the pages and develop/distinguish at least some of the characters. Alas.

On the art side, there's some recognizable talent, like Matt Haley (Blackhawk, Duck, Flame) and Sal Velluto (King, Ranger, Red Wing, Senator) dropping some less than enthusiastic work. Kevin Stokes (Coyote, Maple Leaf, Predator, Penguin), Mike Lilly (Devil, Islander) and Nathan Massengill (Sabre) actually provide something intriguing (or at least really good looking) but it's actually Tevor Von Eeden, an artist who I've never been too fond of, that really shines here (Bruin, Canuck, Canadien, Capital, Star, Flyer and Thrasher), with some really inventive panel designs and generally going above and beyond the call of duty here with some insanely cool sequences (at least, relative to the content).

(If you must, recommended are the stories for Bruin, Capital, Star, Devil, Islander, Coyote, Predator, Sabre, Duck, Ranger, found under the "Guardian Battles" section)

Elsewhere the site is a section for "Guardians in their Cities" which currently has videos for the LA King and the Philadelphia Flyer. These are 30-second CGI animations, parts of which appeared in the All-Star presentation but with descriptive tags.

Overall, the design of the website is a winner, navigation is easy, it's just truly unfortunate that the characters are so generally weak.

Of all the characters, in design I think I like either the Calgary Flame or Dallas Star the most (of a very short list), while I think the Oiler and the Coyote are the most horrendous (though in practice by way of the comics, the Blue Jacket is truly an abomination, as the Coyote story is fairly decent and the Oiler quite forgettable).

I'm horrified, yet curious, somewhat offended but intrigued by this whole thing. There's grand commercialism at play, and I haven't decided how it's any different than what goes on with mainstream comics, except that, I guess, the popularity of comic characters is determined organically as opposed to shoving a character down a particular city's throat by association.

Next week... reaction from geeks, kids, hockey fans and the totally unaffiliated.
Posted by KENT! at 1:57 PM No comments: