Here they are because you demanded them – well, more like we asked and then helped us out – the answers to “What have you learned through comic osmosis. Now originally we were going to just spend a day on the answers, having chosen the best of the best. Problem is a lot of the answers were amazing. So each day this week one of our loved ones is going to get a moment to shine in all their comic knowledge glory.

We are starting the week off with a stand-in. It would seem that Mike P’s. girlfriend would not let him remove the ballgag he wears at home long enough to ask the questions. So, standing in is my little sister, Emma. She has spent the last twenty-two years living in a family of not one, not two, but THREE comic readers. If there is anyone out there who has had the time to absorb comic nonsense it is she. So here we go. 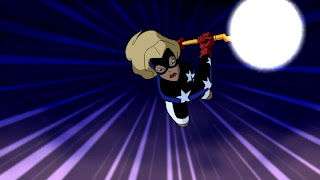 Emma: From right underneath his wrist. Isn’t he a scientist? Aren’t they part of his suit and not from his wrist like in the movie? Do they come out of the top of his hand? I am trying to make the hand gesture.
2. "Who killed Superman?"

Emma: I don’t know I didn’t read that one. Wasn’t it Lex Luthor?

3. What is Magneto the master of?"

Emma: Magnetic Fields – maybe. I think so. He can use his hands to make metal do stuff.

4. What holiday does Luke Cage think is sweet?

Emma: I don’t even know who that superhero is. I gonna go with the 4th of July because superheroes are patriotic and they love America. I am going to assume he is from America, unless he from Europe or some shit.

5. How many Robins have there been?

6. Who is Green Arrow married to?

Emma: I don’t know. I just know he has a pointy beard and Kevin Smith wrote the comics. In the comics she has red hair, unless she had brown hair. He’s the one with the pointy beard, right?

7. How far into the future are the Legion of Super-Heroes?

(As a side note, my sister is the only person in the world who still calls me Benjamin on a regular basis.)

Emma: Goo. Radiation goo. Because everything in comic books is because of radiation.

Emma: Of the year? When he gets to take that chick that he hangs out with into the swamp.

13. What mood do you not want to see Bruce Banner in?

Emma: Well Bruce Banner is the one who…he’s not the editor-in-chief of the newspaper that what’s his name works in – you know Spider-Man?

Ben: That is J. Jonah Jameson.

Emma: I don’t know…wait he’s the Incredible Hulk. You don’t want to see him mad.

14. What animal does Mary Jane Watson like to call Peter Parker/Spider-Man?

15. How many claws does Wolverine have?

Ben: See you are nailing these now.

Emma: Yeah, but these are like what number is this.

16. "When Billy Batson says 'Shazam', he gains the attributes of six legendary figures. Which figures, what attributes?"

Ben: Are you going to guess?

Emma: How do I know so much about this guy? So A is for Achilles and his power is breaking his ankle…no being brave. That is his power.

Emma: S for Samson and his power is being vain.

Ben: Close. But you know because you said Odysseus his name would be Shozam.

(At which point my sister started going Show-ZAM!)

Emma: His face? Like the drawing of it? What time did he come out?

Emma: I would say (thirty seconds go by) God people in the 40’s…Cary Grant.

Emma: His planet of Krypton…wait, no, it’s the sun. He gets his powers from the sun. I remember that from Mallrats.

20. "What city does Superman and Batman call home?"

21. "What is the only thing that hurts Superman?"  "

22. What is the name of Superman’s girlfriend?"

Emma: I take it back. Lois Lane. Who is that red-headed chick?

24. What weekly comic does Judge Dredd regularly appear in?

Emma: Ummmmmmm…that name sounds really familiar. I don’t think it is Superman. It might be Spider-Man, but that is not my final answer. Wasn’t there a movie with Sylvester Stallone called Judge Dredd?

Emma: Is that the same character?

Emma: Then I don’t know

Emma: Do we ever find out his surname?

Emma: Well he’s a superhero and he is one that carries a big gun and has cables in his hand. He can shoot lasers.

Emma: He is a (groan) detective.

Emma: Like as an acronym? What are you saying? Are you saying swift? Oh, THWIP? That has something to do with Spider-Man right? I am going to say that it is the sound that his spider webs make.

Ben: Hooray. You got it right.

Emma: Is it really?

29. "What is Captain America's weapon of choice?”

30. Which super-group is from the distant future: the Avengers, the Fantastic Four, the Legion of Super-Heroes, or the Justice Society?"

Emma: The third one.

Emma: His name has Doom in it right?

Emma: It’s something von Doom. I am going to say Wendell von Doom.

(She then went on for a bit saying Wendell von Doom in a deep voice.)

33. What comes with great power?

Emma: No. They just put them in jail so they can think about what they’ve done. Or psychiatric wards so they can be crazy in private.
Posted by Benhatt at 3:04 AM

That last answer is pure gold.

This is the most AWESOME thing about comics ever written. It made me smile in a big dumb, fun way.

If it turns out this was ever faked-don't EVER tell me...

This is great and needs to be a regular feature.

The Legion of Super-Heroes in 2045. Wow. The very concept kind of blows my mind.

Haha. This was great. I think your sister got confused between the Thing and Swamp Thing. Hilarious.

I'm a regular reader but first time poster here, so...

Not all of us are Comicbook wizards (nor historians) so.. what about adding the right answer to the transcript?

That was better than I could have imagined...

elguerra, that's an interesting thought, adding the answers, especially since the questions arrived from our readers as general questions most comic fans should know... but yeah, even I had difficulty with a couple of them.

We have a little sister?

You're little sister is the best. And super cute.

And i call you Benjamin all the time. You're a goddamn liar, Benjamin.