After nearly three years, DC rediscovered that The Justice League should be treated as a franchise book.

We all know about the fiasco that was the Meltzer/McDuffie/Didio League so, let's just move on...

What's about to happen is that the wheels are spinning again and The League looks as though it'll be taken seriously again. Or as seriously as a comic book superhero team can be taken. 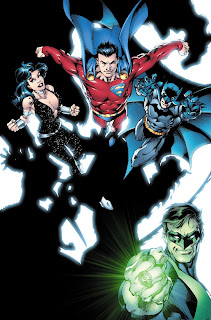 Following a quick fill-in run by writer Len Wein, The League will be put into the hands of Superman writer James Robinson and penciller Mark Bagley.

Now, I'm happy that The League is getting the artistic stability it deserves but why am I not all that excited about it?

Well, for one, this team will have Donna Troy and Dick Grayson on it.

I love both characters but this is something we've all seen before when it was called Teen Titans and Titans, twice.

And yes, I get it that it's Dick Grayson in the Batman suit but it's still Donna Troy in the Donna Troy suit. If history's shown us anything, there will be scenes of her sitting/standing on an ocean cliff, wind flowing through her hair and speaking about everything she's lost.

If she learned guitar, she could actually do something with all of that whining.

And Robinson will get yet another chance to write Mon-El, this time with an S-shield.

I kinda stopped reading Superman sorta because Superman wasn't in it.

What I'm trying to say is that I wish writers would write more towards the needs of the story and less towards DC Comics officially sanctioned fan-fic.

I understand what it is for a writer to want to write a character because yes, if someone were crazy enough to give me The League, oh, please believe, Hawkman and yes, a Lady Cop who somehow came into possession of an Apokolitan Smite & Lessen six-shooter, would be front and center in my JLA line-up.

So, basically, one of two things could happen:

One: With the "true" Superman, Batman and Wonder Woman not on the team, we get an opportunity not unlike the one we had with the Giffen/DeMatteis League. We get a chance to explore new interpersonal dynamics such as a Vixen/Congorilla dynamic, ala Beetle and Booster, a Black and The Gold, if you will.

Or Green Lantern noticing just how much more awesome Dick has always been than Red Arrow, even more so now that he's Batman.

Two: The new line-up starts to make us realize just how awesome it would be to have Superman, Batman and Wonder Woman on The Justice League.

Any bets on which'll happen?
Posted by Devon Sanders at 1:47 PM 7 comments:

On The Beloved Hawkman 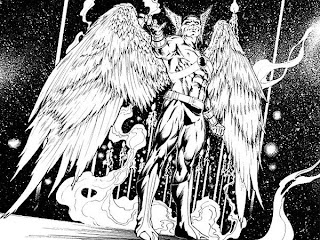 As we all know, Devon is a HUGE fan of Hawkman (meaning he like's Hawks an awful lot, and not a commentary on his weight). I know he's not the only one, but, man, it's got to be rough being a Hawkman fan.

I just finished ploughing through the 1993 Hawkman series (for the first time since it ended) and also the Legend of the Hawkman mini-series, as well as the entire Hawkworld run over the previous two months, and hot damn that's some convoluted continuity. But I knew that already... everyone knows that... but for a brief time it had seemed like they had it all sorted out, explaining the post-Crisis confusion with a bit of bait and switch. But it seemed the more that went on after Hawkworld ended, Katar Hol's half human/half Thanagarian lineage, his Native American heritage, his Zero Hour merger with the hawk avatar and every Hawk champion from the past (including Shining Knight, Nighthawk and the golden age Hawkman and Hawkwoman) only made things so much harder to comprehend. If having one origin was complicated enough, saddling a character with another half-dozen histories and origins wasn't the smartest move. Hell, golden age Carter Hall's whole Egyptian reincarnation bit is complex enough of its own, and reintroducing it in the Hawkman Annual #2 just made for dizzying reading. I have to say though, that John Ostrander and William Messner-Loebs did a pretty good job in spite of all the confusion writing the books like they actually understood everything that was going on.

That the character was ostensibly put on hiatus for four years didn't help much.

During his time Grant Morrison introduced the rogue angel Zauriel in JLA, with the expectation of making him the new from-scratch Hawkman, but DC wouldn't have it. Where's Zauriel now? Nobody knows. Nobody cares.

A while later when the character returned, it was preluded by the befuddling Legend of the Hawkman, in which Katar and Shayera appeared as their silver age incarnation, dealing with the Egyptian and Thanagarian stuff. It was James Robinson and Geoff Johns who came in and decided to revamp the Hawks altogether, giving Hawkgirl a new identity and reincarnating Hawkman as Carter Hall once more so that he was more like his golden age counterpart. This seemed to be the best solution, giving both characters a bit of a fresh start while also allowing them to have connections to the past... but again, it wasn't to last, as Jim Starlin comes in and starts mucking about with the whole Crisis and multiverse business again, stating that Hawkman is an aberration...

Well, he is at that.

And now, there's Blackest Night where yet another indignity befalls the Hawks (not to mention the Dibneys). Sigh.

At the very least we have Kyle Baker's Hawkman in Wednesday Comics... where does he fit in with continuity? Best not think about it.

So, my question for you, Second Printers, is this:
How do we fix the next Hawkman?
Posted by KENT! at 7:44 AM 4 comments:

You could call me by many names.

Before joining the royal family, I was the protege of a Chief.

I've been famous in Victory and withdrawal.

You've seen me as a father, but never as a son. 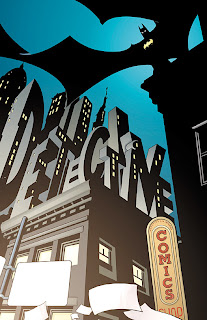 We number the individual fingers of the hand.

Yet, we strike hard, not unlike the fist.

We are leaders and the led.

We die and yet survive.

Why does it feel like I just got done reading sixteen different comics?

This is what reading comics is supposed to feel like.

Was it the strong noir Azzarello/Risso Batman opener or was it Jimmy Palmiotti & Amanda Conner reaching inside my mind and giving me the Supergirl I'd always hoped for? Was it the awesome Super-Pets cameo?

Or is the scope that the over-sized newspaper layout allows for a Paul Pope illustrated jet-pack wearin' Adam Strange?

Or was it the brilliant use of genre-hopping and coloring in Karl Kerschl's Flash and...

Quite frankly, one of the least likely and brilliantly obvious co-features EVER.

Or maybe, it was, as any "Seven Hells!" reader could tell you, it was writer/artist Kyle Baker's fantastic storytelling involving this guy: 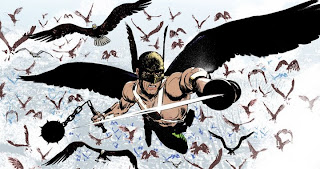 ALL OF THE ABOVE.

Wednesday Comics gives you all the more reason to look forward to Wednesday's comics.

What was your favorite Wednesday Comics strip?
Posted by Devon Sanders at 7:45 PM 4 comments: 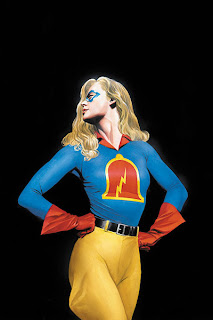 Congratulations to our own Graig Kent and his wife, Adj on the birth of their first daughter and future Superwoman, (Dig this awesome name,) Laurel Liberty Belle Kent.

She's already off to a great start.
Posted by Devon Sanders at 6:08 AM 3 comments: