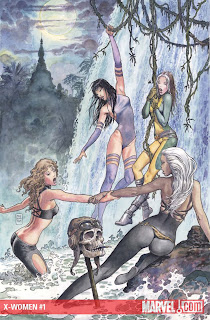 Over at Joblo, comics are reviewed! X-Women is one of 'em. Good luck, you're going to need it.
Posted by Devon Sanders at 4:43 PM 1 comment:

Every universe has them. That one person who, if you put them on a team, just make your eyes and mind agree that that just looks right.

Now, I'm not talking about a Superman on The Justice League. No, more like team players who walk in from limbo, rise to the occasion and make whatever team they're own just that much more awesome.

So, here we go a salute to awesome and we begin with... 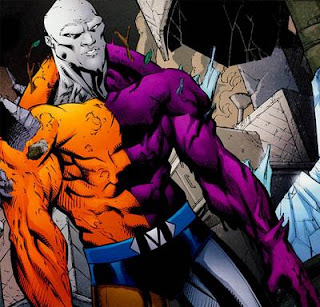 5. METAMORPHO
I don't know what it is about this guy. There's just something about him that doesn't necessarily scream, "TEAM" but I'll be damned if he hasn't, despite his early days headlining his own comic, become an integral part of two The DCU's more prominent teams, The Justice League and The Outsiders.

Defining moment: Selflessly sacrificing his life evacuating teammates, Icemaiden, Obsidian and Nuklon after an attack by The Hyperclan. 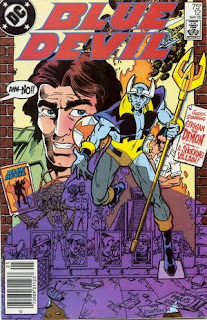 4. BLUE DEVIL
Introduced as a solo character in his own book, Blue Devil has become to many a comics fan's 80's comics reading experience. Since then, BD has taken himself and his talent for attracting weirdness onto three different teams within The DCU, fighting within the ranks of The Sentinels of Magic, The Justice League and most recently, The Shadowpact.

Defining moment: Sacrifices his own humanity to defeat the demon Neron, going from a man in a devil suit to living life as a real devil. 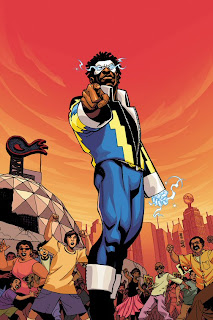 3. BLACK LIGHTNING
Another former solo character who found popularity as a team player. From being personally picked by The Batman to join The Outsiders to currently leading the team. Recently, he's served as a member of one of the latest incarnations of The Justice League and has two daughters, one a former Outsider, the other currently a member of The Justice Society of America.

Defining moment: Turned down a personal invitation from Superman for League membership because it didn't fit with his personal goals. 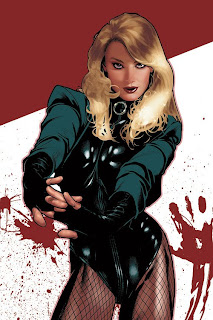 2. BLACK CANARY
A former utility player within The DC Universe, Black Canary has not only gone on to become a marquee name but reserve Justice Society member, Justice League leader and arguably, the star of The Birds of Prey series.

Defining moment: When continuity errors forced Wonder Woman out as a founding member of The Justice League of America, Black Canary was chosen as the only character capable of taking her place. 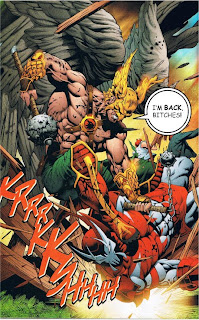 1. HAWKMAN
Because... Hawkman, that's why. Whether serving as chairman of The Justice Society or as a longtime member Justice League, Hawkman has managed to become synonymous with The DC Universe's two most storied and powerful teams.

How The ***Damned Batman Says, "Goodbye." 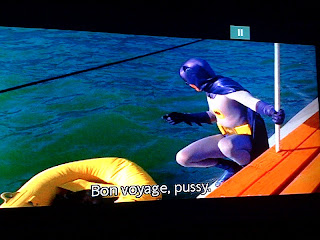 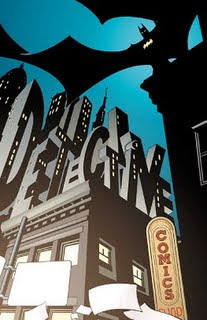 I never fashioned myself as a hero but it just sort of... happened.


As a matter of fact, after a long layoff, I just sort of returned blue.


I've been doing this longer than some but even with everything I've done I just register.


Hell, I must be insane to keep doing this but you know what? I've barely scratched the surface. 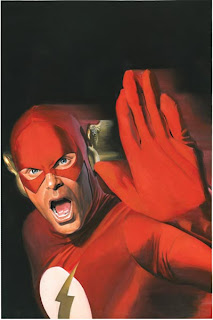 New blogposts coming soon.
Posted by Devon Sanders at 10:42 AM No comments: 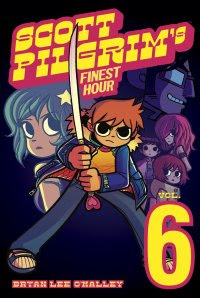 Over at JoBlo.com Devon and Graig (and our cohort Jeb) review comics, in a column called "Comics Reviewed". How... precise.

This week: Scotty Pilgrim, Blackest Night, Batman, Super-Soldier, X-Force:Sex and Violence, and the Death of Dracula

Holy $#!+, an actual Second Printing post! Hello, gang.
I've been away, looking after my baby, building a shed and other things, things that took me away from comics and the internet. But the shed is built, the baby's being looked after, and other things can go insert themselves in dirty places. I want to talk comics.

I'm sure I mentioned a few months ago (a few looong months ago) how I was trade-waiting for Blackest Night, and even though I was guaranteeing that I was going to buy it, I was in no way shape or form guaranteeing that I was going to love it, or like it even. In fact, I was kind of dreading the experience as much as I was anticipating it. I mean, more undead superheroes? Sigh. And this was before I knew that Barry Allen and Ray Palmer were so prominently featured (never were there two more boring characters...) 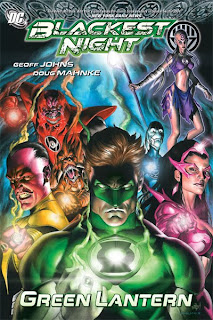 I've written a long-form review of the Blackest Night hardcovers (which we'll link to when it's posted) and so as not to repeat myself too much, I have to say I bloody well loved it. To be honest it's competing in my brain right now with my favourite EVENT comics of all time.

What I didn't say in my review, which I'll say here, is how much I like these sort of "compartmentalized" events, EVENTS which are triggered by the events in one title or another, drawing the heroes of the universe together. That doesn't happen too often, as normally an EVENT is created to have an EVENT for EVENT (and sales boon) purposes. So major cudos to Geoff Johns for his cunning planning and deft execution here.

While it's frustrating to yet again end an EVENT with the lead in to more things happening (Brightest Day, in this case) the EVENT of Blackest Night does seem to resolve what was set up for it to tackle. Nekron's defeated, the dead are totally departed and (for better or worse) some lost loved ones have returned.

Back in April I absorbed all the Green Lantern and Green Lantern Corps trades which followed the Sinestro Corps War (where I left off) and I was enthralled by the "rainbow lanterns". Johns expertly transformed that story into the event of Blackest Night, separating the event into one book and the relevant "rainbow" stuff into the main Green Lantern series concurrently.

Johns really seems to understand, at least with Green Lantern, how to ebb and flow his grander storytelling themes, how to pull back and let the sea quiet down (ala Secret Origins post-Sinsestro Corps War) and then slowly build up the rolling waves until they start to curl upon themselves and crash into the rocks. I'm seeing that even more clearly having already started Brightest Day before reading Blackest Night, and realizing the previously lamented zero issue actually serves a purpose, at least in Johns' scheme of things. I can see what he's building with Brightest Day... not clearly mind you, but I can see that wave forming in the distance that's going to come crashing down on us in 9 months' time. While I've not been reading Green Lantern monthly, I can tell by the solicits for the upcoming months that there's a wave building there too, surrounding the emotional avatars (Parallax, the Predator and others Johns has created to serve as new mythologies in the DCUniverse, where once the Lords of Order and Chaos or the siblings of Death, Destruction, Dream, etc. held sway).

The one thing I need to get over is that there may be no endgame to all this. Storytelling in monthly comics is always meant to go on, and on, and on. There are copyrights to maintained after all. But I hope, that in the scheme of things, Johns has a definitive end for himself, to let himself off the hook, rather than wind up in an X-Files situation of years of plodding nonsensical randomness.

I'm still wavering on where to place Blackest Night in the hierarchy of DC's event books, but here's my current hierarchy (did I miss anything? Are 52 and Countdown considered events?)


The Good:
1. Final Crisis (I'm a Morrison whore, and I won't apologize for this)
2. 52 (ingenious)
3. Blackest Night
4. Invasion (a perennial favourite, and still an incredible read)
5. Crisis on Infinite Earths (the originoo, doesn't read all that well, but looks phenomenal)
6. Underworld Unleashed (actually one of the best-reading events)

The Ugly:
13. DC 1,000,000 (okay, I'm not *that* big a Morrison whore, not when Val Semieks is involved, at least, ugh)
14. Bloodlines (I have a lot of affinity for loser characters, and this event created dozens of them, plus Hitman)
15. War of the Gods (another Wonder Woman-related snorefest)
16. Zero Hour (oh my word, this doesn't hold up at all)
17. Eclipso: The Darkness Within (once beloved, now reviled after a recent re-read)

The Plain Awful:
18. Amazons Attack (so dreadfully mishandled, how can something with such delicious ingredients taste so awful)
19. World War III (extremely poorly executed aside to "52", will be forgotten)
20. Millennium (welcome to dullsville, population: you)
21. Countdown (the horror...)
22. Genesis (almost completely forgotten now, as it should be) 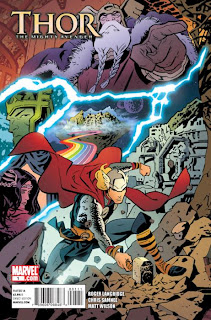 Over at Joblo.com, Devon and Co. review comics. Somebody stop him! He's only ONE MAN!
Posted by Devon Sanders at 6:56 AM No comments: 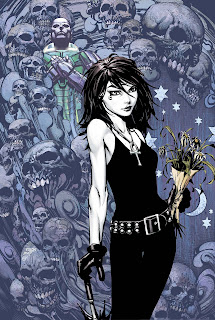 Cover to October's Action Comics #894.
So, the rumors of the Vertigo characters returning to the DC Universe proper are true.
More importantly, it's being written by Paul Cornell, the writer who had Doctor Doom and Dracula standing on the moon, debating which parts of Earth each would take. Oh, comics, it's like I love you again!
Posted by Devon Sanders at 1:19 PM 3 comments: 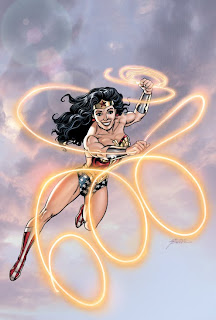 Over at Joblo.com, comics are reviewed by Devon and Graig in a column we could only call, "COMICS REVIEWED!"
Posted by Devon Sanders at 1:44 PM No comments: 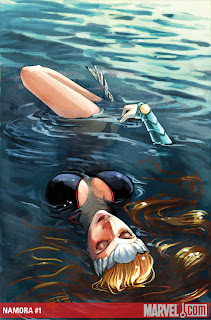 Over at Joblo.com, Devon, with a mighty leap, reviews comics!
Posted by Devon Sanders at 1:55 PM No comments: