Getting to Know…Our Family pt.3

So we have hit the mid-way part with the answers, I hope you are enjoying them. Up today is my lovely wife, Hannah. Now my wife is not a comic nerd or any type of nerd for that matter. However, one thing that has kept our relationship going is her never-ending tolerance for listening to me blather on about what is happening in comics. And not just comics, she spent one evening listening to me explain what every colored square on a heroclix dial meant. That is love. So we cuddled up in bed one evening last week; me with my laptop, Hannah ready to help out her husband with his blog.

That scene did not last long though. Understand this, my wife does not like being wrong. She likes to know the correct answers to things. So, while she does get many answers factually correct, most of the answers were accompanied with at least five minutes of squinting and teeth gnashing and fist shaking. At one point she stopped talking to me. So loyal, Second Printers, know I put my marriage on the line for you. 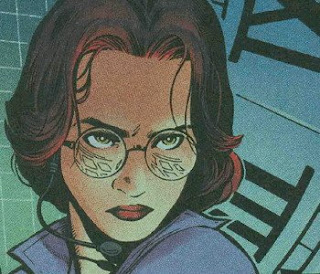 (This was the look she gave for most of the quiz)

Q: Where do Spider-man's webs come from?

(She tapped her wrist.)

Hannah: Wait, what? When did he die?
Ben: When I was ten.
Hannah: Was it Lex Luthor?
Ben: No, it was an alien named Doomsday.
Hannah: Who knows that?

Q: What is Magneto the master of?

What holiday does Luke Cage think is sweet?

Hannah: Halloween.
Ben: Are you only saying that because it involves candy?
Hannah: (with a smirk) Maybe.

Q: How many Robins have there been?

Q: Who is Green Arrow married to?

Q: How far into the future are the Legion of Super-Heroes?

Hannah: I am not going to say anything out loud because anything I say out loud you will put down but I need to think out loud. (Then she squinted her eyes for a bit) 500.

Q: What is Aquaman's real name?

Hannah: Oh fuck, I knew this. (Then she saw me writing that) You are a bastard.
Ben: Arthur Curry.
Hannah: O.k. I didn’t know that. But I will remember it now.
Ben: Why?
Hannah: Because Arthur was my grandfather’s name and curry is an Indian dish.
Ben: Wait, what?
Hannah: Well, you know, my grandfather was British and curry-
Ben: Oh, I get the connection between the names but what does it have to with Aquaman.
Hannah: It works in my mind.

Q: What is Robin's real name?

Hannah: Dick Grayson.
Ben: You said there were three, what about the other two?
Hannah: Well there was (two minutes of thinking) Hal Jordan – wait he’s a Green Lantern.
Ben: Good.
Hannah: O.k. I don’t know.
Ben: Jason Todd and Tim Drake.
Hannah: Right, one was dead and came back to life and the other was alive and died.

Q: What is The Thing made of?

Hannah: “Rock? Is that right?”

Q: What was the name of the 'Justice' superhero team from the 1940s?

Q: What is the Thing's favorite 'time'?

Hannah: Who is the Thing? Seriously. Is he that rock guy from the Fantastic Four.

Q: What mood do you not want to see Bruce Banner in?

Q: What animal does Mary Jane Watson like to call Peter Parker/Spider-Man?

Hannah: She doesn’t call him Spidey?
Ben: Nope. It was an animal.
Hannah: Um…Tiger?

(Got it on the first guess)

Q: How many claws does Wolverine have?

Hannah: On each hand or total?
Ben: I don’t think the question specifies.
Hannah: Four on each. (But as I was typing she grabbed me and spoke maniacal vehemence) That’s not right he has THREE on each.
Q: When Billy Batson says 'Shazam', he gains the attributes of six legendary figures. Which figures, what attributes?

Q: Who was the model for Captain Marvel's face?

Hannah: This is something only nerds know. Wait, don’t put that. I am going to be the enemy of all nerds.

(There you go, my fellow comic readers, if ever you needed an enemy now you have one - my wife.)
Q: Where do Superman's powers come from?

Q: What is Superman 's secret identity?
Hannah: Clark Kent. I can also tell you Batman’s. It is Bruce Wayne. And Spider-man’s, it’s Peter Parker. I know all three. You better put it on there that I know all three.

Q: What city does Superman (or The Batman) call home?

Q: What is the only thing that hurts Superman?


Q: What is the name of Superman’s girlfriend?"

Q: What weekly comic does Judge Dredd regularly appear in?

(This is the point where she stopped talking to me for a while.)

Q: What is Alfred's surname?

(Good for her. I don’t think I have ever been prouder of anything my wife has done. When I told her this she said, “That’s sad.” She’s right.)

Hannah: I just know it’s Cable and Deadpool.
Ben: Yeah, but who is he?
Hannah: I don’t know. Who is he?

(After the Judge Dredd interchange, I left that one alone.)

Hannah: (She held her hand up, making the web shooting gesture) That’s it right? It’s the sound effect for Spidey’s webshooters.
Ben: Yep.
Hannah: I thought it was an acronym for something like These Here Webshooters but I couldn’t get farther.

Q: What is Captain America's weapon of choice?

Hannah: (There was an extra long time of looking confused for this question) Well he’s got a shield. He THROWS he shield.
Q: Which super-group is from the distant future: the Avengers, the Fantastic Four, the Legion of Super-Heroes, or the Justice Society?

Hannah: The Legion of Super-Heroes.

Hannah: Karl Marx. I was just pulling out a name. I don’t know. I feel like Bruce Banner.

Q: What color pants does the Hulk always wear?

Q: What comes with great power?

Hannah: Great Responsibility.
Posted by Benhatt at 3:05 AM

Hannah: I thought it was an acronym for something like These Here Webshooters but I couldn’t get farther.

That is pretty brilliant, actually, I never even thought it could mean something like that.

Sweet Christmas that was fun, Ben. I'm sure it was equal parts fun and painful for you, and Hannah has definitely been paying attention. She should be proud (and so should you, heh)

I can't believe the "Shazam" question is throwing everyone like this. What is WRONG with kids today?

And Captain Marvel is totally Fred MacMurray in tights and a tiny cape ... how can people not think that's the most amazing thing ever?

This makes me sooooo happy

Yeah, I've been reading comics for a few years now, including two Captain Marvel miniseries and the current ongoing.

And I still can't answer the two Captain Marvel questions. There's no way anyone but a hardcore fan is going to get them.