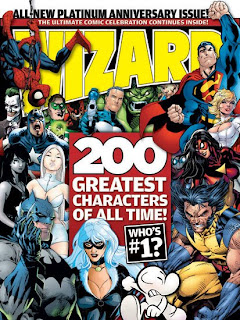 Last week marked the end of an era.

It was over a long, long time ago but after seeing what I saw last week, it came to a complete and utter end.

Wizard, somehow, reached its 200th issue and to celebrate, did a "200 Greatest Characters" list.

So, who came in at number one? Was it the character who started a whole new genre, Superman?

No, you read that right.

Did we all take the WABAC Machine to 1993? Where's Mr. Peabody? Where's His Boy, Sherman?

What was the justification? Spider-Man, Batman and Superman live in a world of "black and white, definitive right and wrong. Wolverine exists in colorful shades of gray."

I had to do a double-take. Had there been gin in my mouth, it would've been a spit-take. And, we all know that if Wizard would have made me spit out my gin, there would have been hell to pay at the Wizard offices.

First, let's look at this line, "Wolverine exists in colorful shades of gray." Number one, "Wow!" Quote me on that. "Wow!" 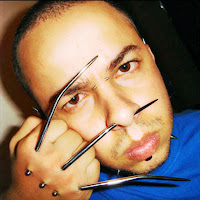 "Wolverine exists in colorful shades of gray" is probably the worst written sentence I've ever read. Sentences like this has me believe writers should be licensed to carry their exposition.

Really, Wizard? Wolvie's number one because he introduced the concept of "not good/not evil" to comics? Is that really anything to celebrate? Moral ambiguity.

How utterly... asinine. Welcome to Wizard 200. It's a celebration!

Good versus evil. Isn't that what we read comics for? To see the good guys win? To see the bad guys defeated? Not every character is going to be a Sabretooth, who will eventually re-grow his head after being beheaded by Wolverine. I personally like it when comic book villains are soundly defeated with a sock to the jaw and live to fight another day. Gives one something to look forward to.

Decapitation, it's the new black.

Now keep in mind, I haven't actually bought a Wizard in years but working in comics shops, you always crack one open out of routine and most likely, curiosity. You just have to know if they could possibly up the ante on not realizing just how obsolete they've become.

It's like reading anything on Britney Spears in a way.

As a matter of fact, the shop that I go to gives Wizard to you free of charge with the opening of a subscription box. Two months ago, I started working there one day a week. On the week that Wizard comes out, I can't tell you how many times a customer has handed Wizard back saying, "I won't read it."

You read that right, we literally can't give Wizard away.

From the ridiculously amateurish writing to the God-awful page layout...

First of all, who was the monkey that OK'ed the layout for "The 200 Greatest Characters Of All Time?" Who allows the number one to be printed first, not last?! You do know that slike these work best from LAST to FIRST, right?

No? It's on the page for everyone to see so I guess you don't. I digress...

Wizard, itself, has become lamer than any sexist joke they could ever tell.

His defining moment so far has been being trapped in the Watergate Hotel. Well, he was upside-down and drug-free, so number 154 makes sense, I guess.

The King of The Seven Seas. Founding member of The Justice League. The only character besides Superman, Batman & Wonder Woman to be consistently published by DC Comics in The Golden, Silver & Bronze Ages. The first DC character to become a married man. Historical significance be damned, we've gotta put the cartoon villainy of Cobra Commander 97 places before you.

Uh...Wizard. Should I mention that nearly every significant "X" event stems from this man either losing his confidence, his control over his powers or his woman? He's Marvel's biggest loser and thusly, their biggest bread-winner. Yet, there he is parked at 106. (*heh* 106 & Park)

It's thing like this that just lets you know that they should just quit. Sites like Newarama and Comic Book Resources just have them beat. Is this me calling for the end of the comics magazine as we know it?

You'll find no greater supporter of the printed page than myself. What I do realize, like the newly launched Comic Foundry does, is this...

Don't compete with that.

You can't keep up with the internet. It's like the tide, it shifts, it crashes, it sweeps in the new things and sweeps away the old and ultimately moves on. Comics readers can be that way as well. If you're going to compete in print-form what you need to do is simple.

See? There it went.

I don't care who the "HOT" writer or artist is. I want to know who's doing good work consistently. I don't want hype. I want depth. I want to know why I should be reading a certain book. Should I be reading it because the "hot" artist or because of its content. I'll go with content, not "hot." Wizard focuses too much on hot and reads like a 90's time capsule and my head and my wallet just aren't there anymore. Wizard, at nearly $6 per issue, offers 90's content at new millennium prices.

I get Wizard for free and I'm not buying any of it any more. And, there's nothing you can do stop me.*

*Now how 'bout them shades of gray.
Posted by Devon Sanders at 7:46 AM

Hee hee hee! Seriously, a "colorful shade of gray" just cracks me up. Do they HAVE editors?

The only Wizard I have room for in my life is Caron Butler... but on a serious note, I think this again demonstrates why fanboy culture can be so detrimental to the actual storytelling aspect of sequential art (that's right... I said sequential art).

When was the last really good story that involved Wolverine? The most recent examples of really good X-Book storytelling have not had Wolvie front and center. The most iconic thing about Wolverine is that he's not really iconic at all. I think this shows that Wizard lacks in both reverence for the history of comics and understanding of what would best constitute the future of comics. Plus they can't write.

I've never read an issue of Wizard so my boycotting it would be an empty gesture at best, but if I did I know that selecting the single most overrated and least interesting character ever created as the greatest in the history of the medium would demand no other reaction.

I have no problem with someone composing a list based on "coolness" rather than history or impact, but even by that standard Wolverine still isn't in the top 200.

Just for the sake of playing Devil's Advocate, I would definitely say Wolverine is an iconic character, and certainly one of the best characters to come along in the last thirty years.

Once you get past the initial Siegel/Shuster/Kane/Finger/Marston and Lee/Kirby/Heck/Ditko creations, there're very few comic characters who have broken out of the ghetto of comics fandom and achieved serious mainstream prominence. Wolverine is one of the few I can think of that you can reference to any schmo on the street and they'll know who he is. Seriously--beyond Wolverine, name me five comic book heroes or villains invented after, say, 1970, that the general public will recognize. Venom, possibly, but that's about it. Blade? Largely due to the movies, which pretty much tossed out his entire history and remade it. Hellboy? Again, known largely due to the movies.

Wolverine is a great character because he goes against every archetype of what a comic book hero is supposed to be. He's short (or he was, until the movies--now he's roughly average height). He's ugly. He's sour-tempered. He's not innately a good person. He drinks and smokes. Many of these changes have been neutered by the movies and Quesada, true, but they already had their impact on the character--Hugh Jackman was puffing on stogies in the films like no tomorrow. Most of all, Wolverine kills like it's no thing. I don't admire that, but then again, I don't feel like my heroes have to always live up to an ideal that humans themselves won't live up to in order to be heroic.

The point is that for all that he's overexposed, overdone, and overused, you can really write great stories with him. I'm thinking about everything from the classic Claremont/Miller miniseries, to the underrated Steve Skroce four-parter "Blood Debt," to
"Weapon X," to Jason Aaron's recent awesome work with him. Yeah, some of his stories are crap. Yeah, he's as cliche as it comes and you can trace a lot of the whole 90s love of "badass" characters back to him. But as Mark Gruenwald said, there are no bad characters, only bad writers. And given that he himself wrote a classic Captain America vs. Wolverine story back in 1986 or so, I'd say he had a handle on the problem. :)

I wouldn't say Wolverine is the greatest comic book character ever created by a long shot--but you can't deny the impact he has had on comics and that the general public connects with him, even if it's on a simple, visceral level. That's more than can be said for a lot of characters treasured by fanboys.

I hate to say it, but Wolverine does cross all barriers. I've only ever met one comic book fan that genuinely disliked the character.

There's a universal appeal of the angry monster in all of us that escapes sometimes. It makes him very relatable as an everyman character, razor sharp claws and all.

heh..I wonder if this means that in 30 years time Len Wein and Herb Trimpe's descendants will be getting their massive cuts of creators rights from "Incredible Hulk 181" as well as fighting over "Wolverine Boy", "Wolverine Girl", Calgary-Canada, and clone of "Wolverine Boy"...

I was amused that Emma Frost apparently was judged the 69th Greatest Comic Character.

"Really, Wizard? Wolvie's number one because he introduced the concept of "not good/not evil" to comics? Is that really anything to celebrate? Moral ambiguity."

And here I thought his name was Namor, and he was re-introduced to readers in 1962 by a couple of hacks named Lee and Kirby.