Put Up Your Dukes

O.k., Blogosphere, I am calling you out. It’s fight time. I am not talking slaps with gloves or a gentlemanly duel at dawn. I am talking taped up knuckles and shirt off like Brad Pitt in Snatch. Course I am not nearly as fit or attractive as Brad Pitt so most likely it will be your gag reflex that takes you down rather than my fists – but whatever! This is a mean fight.

What am I so steamed about? Whose honor am I defending? 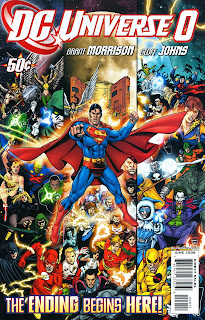 DC Universe #0.
I am tired, Blogosphere, of your collective besmirching of DC Universe’s good name. All this, “It wasn’t worth it” or “It was nothing but a house ad.” Who cares? It was fifty cents. That is less than the cost of a bag of potato chips. Chips do not stick around so you can eat them again; they just leave you with greasy fingers.

Before I get into things I want to say I am not trying to be a DC apologist. Countdown was definitely not good. I was planning on doing a post where I reread the whole series and then write about it but after like three issues a bit of me died. But unlike DC Universe, Countdown was fractured, poorly paced and, with tie-ins, cost like $200. That was more than my couch cost and it is super comfortable and is a COUCH! For $200 I better be getting something that lasts and is awesome. Countdown was a mess.

But let’s bring it back to the awesomeness that is DC Universe #0.

Blogosphere, I have heard you complain that the comic was nothing but house ads. That is simply not true. Last time I checked house ads didn’t reveal key story points. In fact last I checked house ads didn’t have a story at all. There was definitely a story. Yes, there were a fair amount of ads in the DC Universe #0 but they all were at least ads for comics and not scary ads with arms coming out of stomachs force-feeding people hotdogs. “Hunger gets what Hunger wants,” indeed. 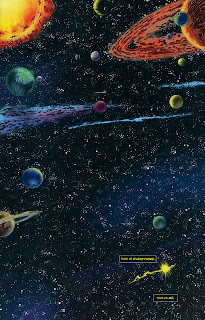 Even if it was merely an ad for DC, who cares? It was fifty cents. Blogosphere, how can you get upset about that? I have seen you drop twice that much on Marvel Previews and even more than that on Previews. I have seen you buy source books and secret files – issues that have no more redeeming value than the back of those old collectable cards. “Oooh, Speedball has an agility level nine on this made up bar graph.”

DC promised that Universe would give a broad view of what was going on in the DCU. I think the comic did just that. With some fairly sweet art, I might add. Getting on comics that don’t fulfill what they promise is one thing. I say do it. But when we start hitting comics that do what they say and do it o.k., that’s when it is time to reevaluate our position as collectors.

I am just saying that this image is worth fifty cents alone. 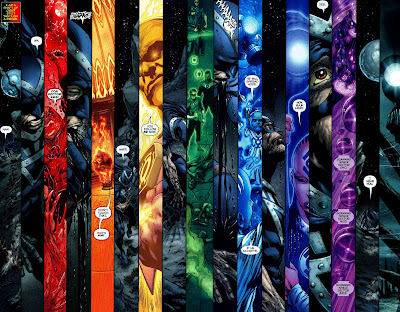 I loved this book. Re-read this books as soon as I finished it.

But one good book does not make up for the Countdown/Death of the New Gods/JLA/Amazons Attack continuity crap that DC editorial has turned out over the last year.

I'm in, but the editors need to prove they've got control of their shared universe.

This book did what this book said it would do. What's the problem? Sure, this last year was disappointing, and I think that's been as admitted as its going to be.

Who knows, maybe Final Crisis will make some of it worth it (I'm not holding my breath, I think Morrison even said he wasn't doing anything that Countdown set up).

Regardless, comics are always in motion: You take the good, you take the bad. You take them both and there you have: DC Universe #0.

I am tired, Blogosphere, of your collective besmirching of DC Universe’s good name. All this, “It wasn’t worth it” or “It was nothing but a house ad.” Who cares? It was fifty cents.

Ok, so because DC made it 50 cents before the price jumps back up to $3.99 or however much it will be, that is supposed to make it a good issue? All to what? Point at another "Crisis" in the Universe. How many times will they keep going back to that well? As long as people keep buying it I guess that won't stop.

If you want to look at it as a stand alone issue can you really? Is there anything really answered or advanced in the "plot" of DC Universe #0? What was it there for? To show you different books upcoming story lines. Oh yeah, and to repackage George Perez Crisis art. Oh and to bring back a Flash? Hey waitaminute. Didn't they just have a convoluted crossover last year to do just the same thing?

And for the record I have never dropped a dime on Previews or Marvel Previews :)

I'm always at a loss to hear the attitude of the jaded fanboy. and I tire of the no-way-out trap they have set for DC and Marvel or ANY company that makes comics.

I think that its very difficult to present ANY story with enough of a spin to make it "new" without upsetting readers. A delicate balance-but one which DC makes.

The plot points themselves may never be truly original. Characters live. Characters die. But it is the WAY in which these dramas unfold and HOW they are presented which creates the entertainment. the drama. the interest.

We do NOT create these books. We pay for them. and we support them

We feel some entitlement that DC "ought" to give us what we want (sometimes without us knowing it).

We said that we were tired of their "crisis' books crossing over to every book in the DCU "forcing" us to buy all of them!

So they cut back and stopped doing that.

And yet, MARVEL has continued to do the Secret Invasion cross-overs and THEIR Books dominate the comic book market.

I will buy my copy of "Final Crisis" to enjoy a ripping good yarn by Grant Morrison and JG Jones (and related oneshot xovers). I may like it or not...but I WILL give it a fair shake and I'm looking forward to it.

and ya' know..nobody forces you to read this stuff. The DCU#0 book made me excited. If its not doing that for you...why are you reading them and posting here???

'm always at a loss to hear the attitude of the jaded fanboy...If its not doing that for you...why are you reading them and posting here???

Oh come on now. That's the the standard rallying cry for the "fall in line" fanboy. The one who accepts what is put out without question or inspection.

Simply because I grew tired of reading the same rehashing of these "events" put out by Marvel and DC, the cannibalizing of the industry if you will, doesn't mean that I can't express a contrary opinion. Especially when the post itself is "calling you out".

And knowing a couple of the guys who run this site, and whose opinions I respect, I don't think that they would be against hearing a different point of view. My stating that DC Universe #0 doesn't warm my cockles in no way invalidates the joy Ben got from it. But if you can't express a contrary opinion then what good would a blog like this be? It might as well be an old school letter page in the back of a single issue then.

I don't buy the event books anymore. It doesn't mean I don't still enjoy following comics and discussing them with others. The comics industry has always enjoyed a fanbase that likes to argue. But that discussion shouldn't just be limited to "Can Thor beat up Superman". It should also encompass things that you enjoy as well as things that don't cut the mustard. So please, because my opinion is different than yours don't tell me that i don't have a right to post on here.

Man, I hate those hunger ads. I've just gotten around to bagging my last years worth of purchases, and I've been assaulted by those images on the back cover way too much for my liking. I want to punch some of those kids in the face, but then they'd probably pop out dozens of arms and kill me.

What, you want an on-topic comment? Well, ok. DCU came out here today, and I bought it. I didn't expect to find it interesting, and for the most part I didn't. But like you say, it was 50 cents (well, $1.95 here, but still $9 cheaper than the issue of Iron Fist that also came out today). Absolutely no complaints from me about it, cheap comics is cheap comics, and it achieved what it set out to achieve.

I will not be dropping Green Lantern simply because of that Blackest Night preview, no matter how pissed I am about a 6 issue(!) origin story...