Devon Vs. Checkmate #26 And The Bear Wins And Other Stories - Updated

Wanna know why comic shops do some of the (asinine) things they do? Maybe I can answer that having worked in several over nearly thirteen years.

Did you know that Ben is a school teacher? Ask him where milk comes from. That's a good one.

Wanna know what a Kentucky Bengal is? Can one really get lucky in Kentucky? Ask Mike.

Wanna know how to find a man on Craigslist? Ask Carey.

Again, ask us anything, we are men of experience.

Well, don't forget to leave your questions for yesterday's Getting To Know... Us: The Questions. It's a wonderful opportunity to ask us the questions your parents never wanted you to know the answers to.

THE COMICS GODS HATE ME... 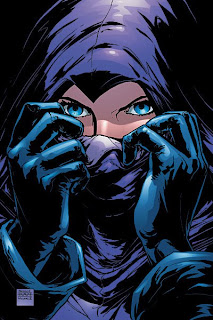 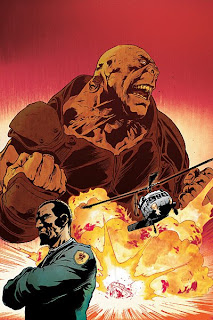 So... remember when I said I was going to drop Checkmate with issue 26?
There's a guy fighting a bear in it...

...and Asian villages smashed under giant monster feet. It's like they know my heart.

Damn you, Bruce Jones. You may have won this battle, you WILL NOT win this war.

THE COMICS GODS LOVE ME... 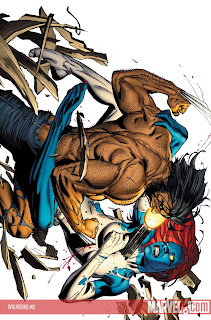 Finally finished reading Jason Aaron's Wolverine run (62-65) and damned if that wasn't the Wolverine I've been missing for over a decade. Total bad-ass through and through. A stone cold killer past, present and future. Throw in butt-naked shenanigans from Mystique and you pry $11.96 out of my pockets every time. 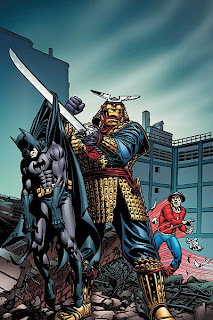 13's usually considered an "unlucky" number. Not with The Brave and The Bold #13, with one "Yes, sir" and a smile from an old hand, I was reminded of how awesome of a place the DC Universe can be. 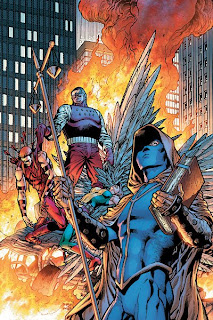 "Why don't we call it "The Star Chamber."
Dear DC Comics,

Re: Justice League of America #21

Please, stay out of Justice League of America writer Dwayne McDuffie's way. When he comes up with an idea for a Legion of Doom story arc, don't undercut him again by making him tell the story in two issues just so you can do something wacky like Salvation Run. Call me "wacky" but I think your greatest heroes deserve to take on your greatest villains in an appropriate title such as... Justice League of America. This issue's what his run shoul've been from the get-go.

When this man gets to tell stories without someone else's backstory getting in the way, you have gold on your hands. When McDuffie has Superman, Batman (Who is hilarious in this issue, by the way) & Wonder Woman sit down in "The Lounge" and just talk, it's infinitely more exciting than any two issues produced of them fighting The Suicide Squad. The other side effect of this issue? It actually makes me excited for Trinity and Final Crisis and future JLofA issues.

Justice League of America #21 had something that's been missing for a while now. It felt special. It was excellent. Let's keep it so.
Posted by Devon Sanders at 5:03 AM

See? I told you Wolverine is still the mad hotness. All he needs is a team capable of understanding the sublime meaning of the phrase "badass," and they can sit back and let the fur (and Adamantium claws) fly.

Jason Aaron is like Christos Gage--these dudes write some kick-ass comics, and yet they aren't getting the assignments they should be. Don't get me wrong, I love the stuff they are doing, but I want to see them taking on some higher-profile work. Let's hope the trend of raw awesome continues.

You hit the nail right on the head. The art's been another thing holding this book back. Carlos Pacheco has that rare ability to make everything he draws seem epic. Regular artist Ed Benes isn't bad by any means, I just don't think he's right for this book. He just sort of assembles the page and throws in some poses for good measure. Too 90's for my tastes.

I wish Pacheco could stick around but he's never been known for his "stick-to-it-iveness."

Aaron is really good; I hope he comes back to DC to do some heroes there, eventually. Sooner or later, I expect I'll be buying his Wolverine in tpb.

And I so want to like JLA. I enjoyed #20, and really liked #21. But the wooden Benes art (with asses like that, who needs facial expressions?) and perpetual derailing of storylines have driven me away. I'll pick up done-in-ones, though -- anything McDuffie writes and Benes doesn't draw.

Don't you find it hi-larious that once Benes is off the book, everyone talks about how much the art's improved?

I loved this month's Robin.

The Brave and the Bold had several really excellent moments, too.