Versus 2.1: The Cabal (Marvel) Vs. Villains United (DC) Featuring A Very Brief History Of Villainy 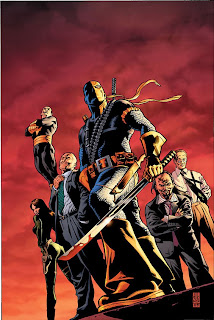 The debate has gone on for decades: which company, DC or Marvel, has the better villains?

DC? DC probably could lay claim to the first villain superstar team in 1947 with the aptly titled, Injustice Society.

Marvel, the younger, comes with the likes of the Doctor Doom, Loki, The Kingpin, The Red Skull, Magneto, Bullseye and The Hypo-Hustler...

Just making sure you're staying with me.

All incredible, all an individual danger to any hero or team who would dare challenge them.

In the mid-1970's DC Comics gave us an assemblage of villains so awesome, so evil, the could only call themselves THE SECRET SOCIETY OF SUPER-VILLAINS featuring A-list characters from DC Universe such as Lex Luthor, Bizarro, Gorilla Grodd and villains so far down the scale of "suck" they were virtually from conception, black holes of creativity such as Capt. Stingaree.

The idea of a secret society of villains was revisited in 2005 leading up to the events of Infinite Crisis and comprised of six of the DC Universe's most tactical and evilest of minds: Lex Luthor, Talia al Ghul, Black Adam, The Calculator, Dr. Psycho and Deathstroke. This team saw varying degrees of successes leading up to an all-out assault on Metropolis so vicious it took every available hero in the DCU to suppress it. 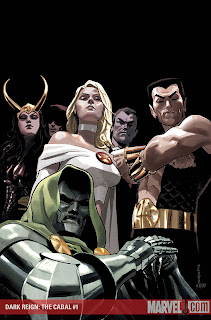 On the Marvel side of things, to my knowledge, the first truly great gather of villains occured in Avengers #6 with the formation of THE MASTERS OF EVIL, comprised of characters from the Iron Man, Captain America, Thor and Marvel comics.

The Masters have used characters such as Dr. Octopus, The Scorpion, Whirlwind and Ultron in their continued efforts to defeat The Avengers.

Therein lie the problem, their motivations always seemed to come from more of a need to simply defeat The Avengers than anything else.

Until someone asked the question; "Where do you go once your enemy has been defeated?"

Recently, in the wake of the death of Captain America the former Green Goblin, Norman Osborn wrested control of counter espionage group, S.H.I.E.L.D. from the grasp its former head, Iron Man, Tony Stark and set his sights not just on the US but the world, forming The Cabal consisting of five of Marvel's current heavy-hitters, Emma Frost, The Hood, Prince Namor, Dr. Doom and Loki.

So, Second Printers, which of the two groups would be victorious in an all-out six-on-six battle for global supremacy?
Posted by Devon Sanders at 9:38 AM

(is there really even a question? Dr. Doom is on a different level from everyone else discussed.)

I give it to DC. Both in quality of villain and in a straight up punch'em'out brawl.

I understand that people really dig Doom and give him varying levels of Doanythingness, but a) no he can't, and b) that's ridiculous.

I'm never going to win a "nuh-uh" match with Marvel fans (which I am one, mind), but consider the Master of Magnetism ranks as one of their most fearsome villains, while Doctor Polaris is Villain of the Week material.

Mastermind: Lex Luthor vs Norman Osborn. Luthor doesn't even need his old armored suit to win this one.

Telepath: Emma Frost vs Dr. Psycho. Awful close one. Each will underestimate the other. If Emma can get over her professional psychic ego long enough to make this a fistfight, I give it to her.

Powerhouse: Black Adam vs Namor. I like Namor a lot, and he'll put up a fight, but Adam will win. Decisively.

Schemer: Loki vs Calculator. Meaning no disrespect to the evil Oracle, the god of mischief has a lot more experience and raw power. Also, look for Loki to betray his friends and become the big bad soon.

Fixer: Deathstroke vs The Hood. Experience and track record pay off for Slade Wilson. Parker brings gumption and untold demonic powers to the table, and loses anyway.
(if you want to put this as "Organizer: Talia vs The Hood", I give it to Talia. She inherited a lot of it, but she's got it regardless.)

I'm not sure this debate can really happen, as it turns out that Emma Frost and Namor have both betrayed Osborn and are currently good guys again. Maybe that just means Osborn is not as smart as he thought, so I have to give the win to DC's group, since they are all on the same side going in.

So, does that leave Doom and Talia in the position of "facilitator," or Destro role, sticking to the plan until an opportunity arises for them to take power?

Marvel. I'm a DC fan, but this is something Marvel has in the bag.

There's a lot of power on the Marvel side, but I can't help but feel like the Marvel villains would all be having some inane argument while the DC villains just came in and killed them all. Once Doom and Loki get a glimpse of Black Adam holding Namor's spine and nothing else (I'm assuming Geoff Johns is writing this comic, BTW), they'll roll out.

yeah, the problem for marvel's group is that two of their guys (emma and namor) are basically heroes and two more (green goblin and the hood) are complete jokes. maybe if they had ultron, red skull and kang the conqueror it would be more of a fight.

I was just thinking that Marvel has a real deficit of actual "mastermind" type villains. Most of them tend to be either thugs (e.g.,Electro, Blizzard, etc.) or monsters (Ultron, Apocalypse, Annihilius,etc.).

In I'm not entirely sure that matching Doom against even Lex would be fair. Lex beats out Sivana who beats out a good many OTHER mad scientist types. Lex is known as SUPERMAN's rival. People know that Doom fights the FF but I mean, Doom was beaten by DAZZLER.

I was thinking about the big dark cosmic types. Thanos was ultimately beaten in Infinity Gauntlet because Warlock pointed out that he LETS them. Everytime Darkseid is defeated something pretty big happens.

Plus, all of Marvel's BEST villains seem to be turned into good guys. Namor, Emma Frost, Rogue. Even Doom in 2099 becomes a good guy.

I'd have to give it to DC-but the universe's breed different kinds of villains...

I go with DC, mainly because one of my favourite 'event' comics ever was Underworld Unleashed and I thought it showcased all the bad guys so well. And I say this even though Magneto is pretty much my favourite Marvel character.