Versus 2: Supervillain Lex versus Corporate Lex

I got directed last week to the joint blogging of Geniusboy Firemelon and GraphicContent and their analysis of the Superman 2000 pitch which Grant Morrison, Mark Waid, Mark Miller and Tom Peyer made back in 1999 in a failed vie to take over the quartet of Superman titles running at the time. It's interesting reading through and through, both the look at what could have been, as well as Chad Nevitt and Tim Callahan's assessments thereof.

One particular point that really drew my attention revolved around Lex Luthor. From the pitch:


Though even he doesn’t consciously realize it, every iota of Luthor’s self-esteem was pinned to achieving that most lofty goal: to be considered the greatest man who ever lived. And he was on his way--until Superman appeared and outclassed him, triggering the scattershot sociopathic tantrum that is his criminal career.


Here’s another secret. Luthor's Lexcorp empire? All the corporate-baron stuff we see him doing routinely? Six minutes of his day, maybe less. He’s not the Kingpin. He only pretends to be.

Nevitt, in his assessment states:

I'm actually not a fan of the idea that Luthor only spends "six minutes of his day, maybe less" on Lexcorp, but I've always found that aspect of the character to be far more interesting than Luthor as supervillain. One thing I thought the creative team of Jeph Loeb, Joe Kelly, Joe Casey and Mark Schultz did right was making Luthor president since that demonstrates the level Luthor plays on, which is one entirely different from other villains.

I couldn't agree more. But it seems the current PTB at DC don't agree, as over the past few years, starting with the atrocious "Batman/Superman: Public Enemies" (both the comic and its animated adaptation) they have been utterly keen on bringing back the early 80's rocket-suited Luthor, and many writers with their "Superfriends fixations have been chomping at the bit to toss him in a purple jumpsuit. Though I haven't been reading it, I'm pretty sure Geoff Johns has once again retconned in the young Clark/Lex Smallville rivalry where Superboy is responsible for Lex losing his hair. Correct me if I'm wrong, just spare me the details. 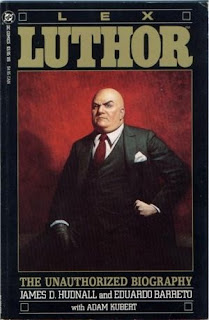 John Byrne's de-powering of Superman in 1986 was right for the time, and in the midst of Reganomics, a corporate villain was apt. But that was then, this is now. Wait a tic, given the Wall Street shenanegans of recent years, an evil corporate supervillain is exactly what we need. But really, think about it. Superman isn't stupid, he's the son of a farmer, yes, but also the son of a scientist. He's able to view the world on a molecular level if he chooses, he can view people on any spectrum, he understands the world both scientifically and emotionally. But one thing Clark isn't is cunning. He, unlike Batman, isn't thinking steps ahead. Superman has generally always been reactive rather than proactive, and though he can see the world in a thousand different ways, he just can't see the world like Luthor can. Luthor can manipulate the world through his corporate structure. Through globalization and international laws of trade he can affect things in an manner that's vague and, in a sense, intangible. What Luthor can do, Superman would have a hard time to follow. Bruce Wayne might not even be able to see it. If Luthorcorp is a privately held company, which it most likely is, Luthor can keep the books off the public record and really get away with doing whatever he wants. How can the Man of Steel battle economic disruption? He can't. Through this kind of maneuvering Lex can have his way with the world outside of Superman's near omnipotent grasp. 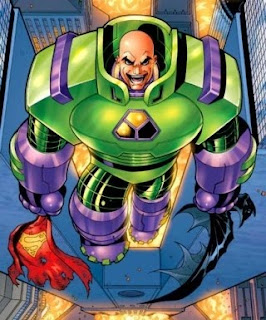 Compared to that we otherwise have a Lex Luthor who is trying to destroy an indestructible man, time after time, going after the big red "S" with munitions and kryptonite, physical attacks that have proven time and time again ineffective. What if Superman developed Kryptonian-enhanced Rogaine® and Lex could grow his hair back? Having taken away Luthor's raison d'etre could they be friends again? I think, (especially given the interaction between Lex and Superman in All-Star Superman) that this kind of "mad scientist" Luthor doesn't inspire any fear in Clark, just pity and sympathy. Corporate Luthor, on the other hand, scared him, because he was playing a completely different game.

Give me the bald, overweight, cigar-chomping Boss Hogg-style Lex Luthor over the Purple and Green Luthor any day. It may not make for better fight scenes, but if you want drama, intrigue, and a real nasty rivalry that's what he delivers.
So Second Printers, I've had my say, which do you prefer and why?
Supervillain Lex Luthor or Corporate Lex Luthor?
Posted by KENT! at 8:11 AM

For the absolutely best playout of what your are describing, read

Superfolks by Robert Mayer. It takes your premise of corporate luthor and rocks it.

Corporate Luthor for all the reasons stated above and for the reason that Corporate Luthor can be a hero to the common man. He can give money and resources. He can build hospitals and fund research. Regular people should love Lex Luthor which makes his obsession with destroying Superman all the more interesting and satisfying.

Lex can go on an occasional mad scientist bender, but it should always be where humanity can't see it so he remains a hero to everyone except Superman and his allies and the readers.

Nate,
I actually tried reading Superfolks last year and got bored silly by it. I think I made it about 100 pages in before I gave up on it. If I ever bother to ask for it back from the person I lent it to, I'll have a look for what you're talking about.

He can affect the world in ways Battle-Suit Lex never could:

Let's not forget how he became President. It took time, money and resources that only a Lex Luthor and LexCorp could provide.

Anyone here mind if I spoil the big reveal in Superfolks? Save Graig the slog of reading it ? (it's true, it's not that great a book. It's seminal because it did post modern superman before anyone else did)

Of the two, I prefer Corporate Lex. For almost 20 years, this provided for some fantastic stories, culminating in President Lex, which has to be one of the ten best ideas DC has ever come up with.

But once he became president, where do you go from there? Just having him go back to LexCorp and scheme against Superman would have been a bit anticlimactic. So I have no problem with him jetting around in armor for the next few years. The real mistake was having Jeph Loeb be the one to handle the transition.

I'm sure at some point, the armor will go back into the closet, and Luthor will once again put on his business suit.

Corporate Luthor, I loved the idea that Luthor employed thousands of innocent people which would always stop Superman, as he didn't have an alternative to putting them out of work

Corporate Lex. I like Super-villain Lex just fine, but putting him in a suit makes him "The Man" that I think Superman would rebel against.

Corporate Luthor, mostly because that's the Luthor I got started with! He was there when I started reading comics, and he made so much sense.

Corporate Luthor a hundred times over. The idea that Luthor himself is a hero to the people with plausible deniability is a badguy with some teeth.

Punching it out with Superman every couple weeks is what everyone else does. This is Luthor, damnit.