Versus 1: DC Cosmic vs Marvel Cosmic

In the past four or five years both DC and Marvel have really, really stepped up their game when it comes to their planet-hopping, space-faring characters. Both have long histories exploring the cosmos but the unity of vision, the sense of "one universe", has never felt so tight.

DC had two mainstays of the galactic scene, the first being the futuristic Legion of Super Heroes. In the late 1980, with the "Invasion" event, the aliens of the Legion were brought into the modern day and made a threat. Thus was introduced the "L.E.G.I.O.N.", an intergalactic for-hire police agency which became the main thrust of interstellar trade at DC for years.

The other, naturally, was the Green Lantern Corps. The GLC, self-appointed guardians of the universe, who had their opposites in the Qwardians, and their compliments in the star sapphires of the Zamarons, and their competitors with the Darkstars. But the Green Lantern Corps invariably wound up earth-bound, numbers were constantly being reduced, down to only one in the mid-1990's.

It was recently, however, that the universe at large started getting a spotlight a 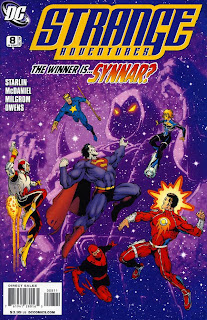 nd it started with the "Adam Strange" mini-series that preceded "Infinite Crisis", paving the way for the "Rann-Thanagar War" and leading into the space-faring heroes (Strange, Animal Man and Starfire) of "52". Oddly enough, Jim Starlin, the chief wrangler of Marvels starbound heroes for many years (decades, even), took the reigns, bridging together the end results of "52", "Countdown" and his own strange adventures of Captain Comet, The Weird and Hardcore Station. Tony Bedard has picked up from here and forged ahead with the L.E.G.I.O.N. revival, "R.E.B.E.L.S."

Of course, the real thrill in the DC Universe has come at the hands of Geoff Johns and his revival of the Green Lantern Corps. With his impetus, all the noteworthy Green Lanterns (until recently) lived and worked in harmony. Hal Jordan, John Stewart, Guy Gardner and Kyle Rayner co-existed and belonged with a unified purpose as space police, the real innovation was taking that literally, giving each lantern an assigned partner, and then extending the Corps to not just having an opposite in the Yellow Lanterns, but a full spectrum of Corps. Are they the police force, firemen, paramedics, army, navy, and marines of the galaxy?

Over at Marvel it started with "Annihilaton". Forget the Infinity Gauntlet/War/Crusade etc. (sorry Starlin), Keith Giffen came in and gave a bunch of tired played out characters new life, taking an old, sad Fantastic Four villain and turning him into a universe-level threat. With "Annihilation", Giffen crafted the grandest space opera perhaps comics had ever seen, (yes, even bigger than "Atari Force") while at the same time distancing the space heroes from the remainder of the Marvel Universe, then embroiled in a civil war, forging a new universe, so to speak, that wasn't so "Earth" centric. Mini series were spawned prior to the big event, giving Drax The Destroyer, Silver Surfer, Ronan the Accusor and Nova - especially Nova - brand new life. 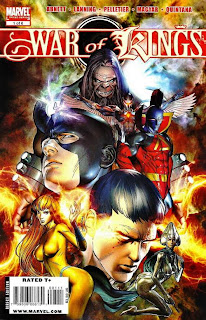 It was Dan Abnett and Andy Lanning ("DnA")who ran with Nova and really made him something special. Richard Ryder became part Firestorm, part Green Lantern (more Kyle Raynor), taking the best of both and really going somewhere new with it. In the first year DnA created Knowhere, a space station at the edge of the universe built on the insides of a decapitated Celestial's head. Think Deep Space Nine or Babylon 5 with a Doctor Who cheekiness, and you have something special. Throw in a telepathic Russian cosmonaut dog as head of security and you have something awesome.

DnA spearheaded the next Annihilation wave, "Conquest" which reintroduced Adam Warlock amongst many other cosmic players. While Conquest's story may have faltered, the off-shoot was a revived "Guardians of the Galaxy", also by DnA, a second ongoing Marvel cosmic book which pointedly showed how the writers have a firm grasp on the spacier side of the Marvel U, even negotiating the Skrull's secret invasion with masterful form, using it as a launching pad for the "War of Kings", wherein the Inhumans take to the stars, overthrow the Kree, and wage war with the Shi'ar, creating a fault in the universe that threatens to destroy all life.

I'm a DC boy from way back and while I find the advances in the mythology of their space characters to be perking upwards, specifically around the events following the Sinestro Corps War leading into Blackest Night, the continuity hasn't been particularly tight with Johns' Lanterns obviously hogging the spotlight, but I'm finding Starlin's role in developing the DCU space adventures to be just as interesting as his "Infinity xxx" stories of 15 years ago, which is to say not at all (to me at least). Johns is a "superstar" writer and while he has time to synch with Green Lantern Corps writer Peter Tomasi, he's too busy toying with Legion and Superman and Flash and Smallville and the Shazam movie to coordinate the non-GL galaxy. The events elsewhere in the DCU generally seem less important, and thus less interesting.

True, the universe is a massive place and to have one consistent thread operating throughout might seem less than logical, but looking over at Marvel and what DnA are doing, they're making it work, making it matter, if not perhaps to the other Marvel U titles like Daredevil or Amazing Spider-Man, but it matters to their little corner. In the same way the mutant titles really operate within their own continuity, DnA have sectioned off the space titles to their own realm and are growing it as its own entity (in general over the past decade, Marvel has become really good at compartmentalizing their universe).

So what say you Second Printers? Which are you fancying more and why?
DC COSMIC or MARVEL COSMIC?
Posted by KENT! at 10:40 AM

I've been staring at my computer screen for 10 minutes trying to figure out where I come down on this question... as obnoxious and borrowed as most of the concepts in Marvel cosmic are, the storytelling is just tighter on the whole. Marvel cosmic lacks the complete misfires of 'Countdown to Adventure' and 'Legion Lost'. Marvel cosmic always is what it is, which is solidly good. I vote Marvel.

The Green Lantern Corps alone could win it for DC but hey, they went and destroyed The Corps, not knowing what to do with it.

Marvel, hands down, has it over DC in the space department.

The Capt. Marvel & Warlock Sagas alone could do it for them but man, Operation: Galactic Storm will always have
a soft spot int heart.

And as bad as the sequels to Secret Wars and Infinity Blah were, they stayed true to their origins so.... Marvel.

Dude... is it possible that Marvel Cosmic is so good because it reads like it's DC?

I haven't been reading either, limiting my exposure to Beta Ray Bill: Godhunter in the cosmic department. But, I can say that I plan on reading Annihilation and Guardians of the Galaxy, while my interest in Blackest Night is negligible at best. BN just doesn't seem all that interesting to me, the idea of a 'full spectrum' of lanterns based on emotion is silly. (willpower isn't an emotion anyway) I'd rather catch up on Marvel Cosmic, and I do like that it is a compartment of the Marvel universe, and therefore we won't get a Dark Reign: The List: Rocket Raccoon anytime soon (I hope).

Bill, definitely give Annihilation a read. Annihilation:Conquest started out strong but got sloppy towards the end (the fact that the prominently featured new Adam Warlock, Quasar and the Wraith both bored me to tears didn't help).

War of Kings, though, I just finished last night and loved(the hardcover collection is $39.99, yes, but it's also got nearly 20 issues packed in there, which pegs it at $2 an issue, so bargoon). It works rather well as stand-alone reading and as addition to Abnett/Lanning take on Marvel Cosmos. Hell, they made Darkhawk interesting, not nearly as interesting as Nova, but still...

The Wraith are involved in Marvel Cosmic again? I'm in! Hitting the stands now.

Let's acknowledge the problem: Starlin. I don't think he's written a good comic in a decade.