When the four of us started this blog we pledged "to write a blog that didn't piss and moan, that expressed our love for the wonderful medium of comics, to call foul when a book deserves it and praise a book when it is awesome."

We've been drinking the Kool-Aid for a while now. Our bladders are set to overflowing so it's time to piss and moan a bit.

We launched this blog in the midst of Marvel's launch of Secret Invasion and DC's Final Crisis. We've had much to say about both and the underlying theme's been this:

When I personally started my former blog "Seven Hells!," comics fandom was going through a period of growth unlike any we'd ever seen. There we were, loking over the edge, watching the architects of the DC & Marvel universes building towards something. At the time, they were building the frameworks for what would eventually become Infinite Crisis and House of M. For nearly two years, we were strung along with the promise of an experience. We, as comics fans, donned our fedoras, threw our "press-passes" into our hat-bands, ran to our computers and began to communicate our thoughts and feelings about being embedded in essentially, Comics Ground Zero.

We were there to bear witness to change.

Four years on and here we stand, with Final Crisis and Secret Invasion, we're watching new additions being built onto the Houses of M and Crisis and we are not as impressed.

For four years now, we have watched the lines being held. With the DC "sort-of" sequel of 52, we were given 52 new worlds to explore. With Countdown, we were given 52 worlds to shrug our shoulders at. With Marvel's follow-up to House of M, Civil War, with the death of the man who came to symbolize what an Avenger should be, we were given a new reason to not care for Iron Man. With the additions of The Mighty Avengers and Avengers: The Initiative, we were given more opportunities to buy more comics. The results, for this fan, more more reasons not to read anymore Avengers. 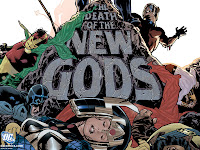 We're standing over the edge, looking over, watching the architects argue amongst one another. Grant Morrison complains that due to the "events" of Countdown and "Death of The New Gods," the universe left behind, isn't the one he had in mind for Final Crisis. He doesn't care and is gonna go on with the story he wanted to tell.

Robin and Batman and The Outsiders writer Chuck Dixon has called out the heads of DC Comics for being "directionless."

I, for one, am glad someone finally said this. Four years now, we've been promised "something" and no one seems quite able to tell us exactly what it is that they're promising us?

Is it a unified universe? Is it streamlined continuity? Is it a pony?

What we seem to be getting lately are surprises such as "Hey, Action Comics was really good this month." or "Barry Allen's coming back? They've only been promising that for three years now."

I'm here to say this:

We should never be shocked when an issue of something issue is good. Do you know why, lately, we notice when something is good?

Usually, when it's not directly tied into with the "events" of the DC Universe or Marvel Universe.

Do you know why the last two issues of Justice League Of America were really good?

The League didn't have to jockey for position with the likes of "Salvation Run" or "Countdown." With Superman, Batman, Wonder Woman, a Flash and a Green Lantern in the same room, Justice League should always be treated as it's own best "event."

DC, Marvel, I just want my comics back.
Posted by Devon Sanders at 4:25 AM

I share your weariness from event burnout. However, it still seems like these events are what buoy the summer comics buying up from the norm. What seems to be preferred is not reflected by marketing and sales.

Still..this seems to have created a distinct niche for non-event oriented titles..I've really been enjoying the Cthulhu horror titles from Boom! and even the Batman by Midnight book by Niles and Kelly as well as the recent Man-Thing title by Marvel. And as much as Hellboy and his associated titles are mixed..I really enjoyed BPRD 1946.

All pretty far away from mainstream stuff so far...but I'm sure there's more..

Hail and amen, Devon. I'm really tired of cross-overs and huge events that never end, except to lead into the NEXT huge cross-over and event.

That's one of the reasons that I liked the Sinestro Corps War so much. It was only concerned with the two Green Lantern books, you didn't have to buy fifty books in order to understand what the heck was going on, and it was just darned GOOD!

Let's try something new and revolutionary. Just get some good writers and some good artists, and let them tell their own story, without having to worry about what the Skrulls are doing, or the Bat books or whatever.

I feel like you're preaching to the choir, and the choir is the comics blogosphere. And yet these things sell well enough to warrant them. In other words, one or both of these is true:

1) People in the business of dissecting comics (blog "journalists") are a minority because most readers don't think so much about "quality".

2) We're all buying it anyway because we a) need to write about it, b) we want to know how the changes will impact the series we do like or c) we're collectors and can't deny our obsession with complete runs and continuity even if we'd like to.

I've made up my mind. As much as I hate to do it, I'm stopping my pulls of Final Crisis and Trinity. I don't care if they turn out to be great, a message has to be sent to DC editorial.

But I'm sticking with SI, because its rewarding me for being a long time reader.

One of the biggest flaws for me, in comics, that may be a reason for the events, is the open endedness (is that even a word?) of the titles/characters. Without there ever really being a beginning/middle/end to so many characters and series we are always going to see companies middle through and try and rev up events to keep sales going.

Granted I would hate to see one of my favorite characters, like Spidey, disappear. And I know the economics of the situation means that will never happen while the big characters continue to sell but how much more satisfying would it be to see writers have to tap new wells and create new worlds inspired by things other than the comics they read growing up?

Like most American TV shows tend to run 2-3 seasons too long, comics for the major characters, run on for so long that we basically wind up rereading the same stories over and over again.

I guess that's why at the moment I'm finding fun in titles like Brian Wood's Local. I'm taking pleasure in the end of the run and seeing what new lines will be drawn in the future to keep me entertained.