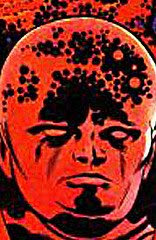 5. Kirby Dots
Shorthand for "Koiby here. I'm about to make something epic happen here, people." The dots get to dottin' and out comes the pseudo-science! Kirby Dots are to be used sparingly, too many and it's all like being in a room with too much weed smoke. Everything's cloudy, everyone's bug-eyed and somebody just needs to get up off their damned ass and open a f*ckin' window and let out some of these Kirby Dots! 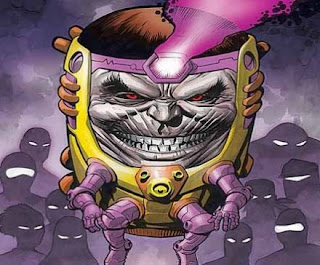 4. M.O.D.O.K. (Mental Organism Designed Only For Killing)
It's a giant killin' head. 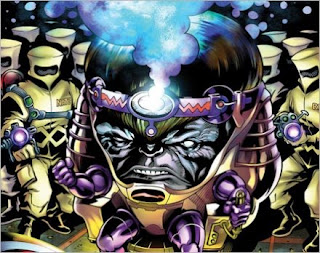 A.I.M. is an organization of scientists dedicated to taking over the world through scientific means.

Where M.O.D.O.K. goes these yellow jumpsuit sportin' science dudes can't be far behind.

A.I.M. is shorthand for: 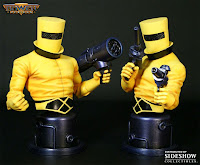 When you join A.I.M., you must be issued a pack of cigarettes, an I.D. number, a book on bee-keeping and a laser cannon.

Seriously, when A.I.M. shows up in any Marvel book, instantly, it becomes Laser Tag: The Comic.

Science quiz: Has there ever been a time when shooting lasers in comics wasn't awesome? No and thanks to Kirby, there won't ever have to find out.

I mean, look at them. Is it me or doesn't the thought of the science club nerd you picked on in high school joining a science-based terrorist organization serving the whims of a giant head with tiny li'l arms and legs just do it for you?

Seriously, how fed up with trying to getting the word out about the dangers of smoking and unprotected sex do you have to be to join a terrorist organization?

If this sound like you then, you just may be A.I.M. material. 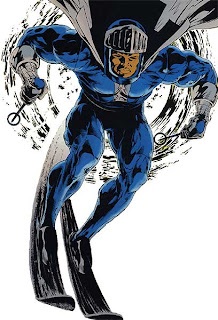 2. The Black Racer
Why The Black Racer? Well, it's just what he symbolizes. He's the Apokoliptian version the ferryman at the River Styx. And, let's be honest with each other, if you see a black man from another planet barreling down on your ass on skis, you pretty much've seen everything you've needed to see in this life, so... 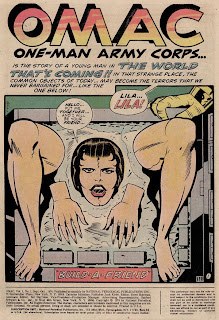 1. Lila
Just so wrong and sexy on so many wrong levels. As far as Lila goes as a character, she's either feminist statement or "vagina dentata," I haven't quite decided yet. As a visual, Lila is simply incredible.
Posted by Devon Sanders at 5:30 AM

Great list! And yeah, Lila freaked my 10-year-old shit out.

I would like to have the super power to just generate Kirby dots every time I'm about to get awesome on something.

Question: What do you think of "Godland"?

I'm another one that was freaked out by Lila, but when she was put together I noticed that her breasts were about the same size as her head. That's when I realized I was starting puberty

To me, it looks like Lila is being born out of a female concrete block. brrr...