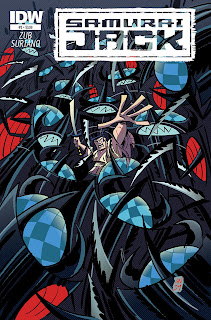 On the third day of Christmas, my comics gave to me...

Well done Jim Zub and Andy Suriano.  You earned the slow clap with this one.
Seriously this issue of Samurai Jack measures up with some of the best episodes of the show, which is high praise indeed, considering how immeasurably amazing the cartoon could be.

Jack roams into an ancient Greek-themed village where he makes fast friends with the village's champion, the boisterous Hercules-like figure (Marvel's Hercules specifically, or even Aquaman from the Brave and the Bold cartoon) Gloer the Great.  Suriano nails the design and physicality of the character, while Zub crafts a big personality in the dialogue.  Of course, everything isn't as it seems but what it really is is a great twist in Samurai Jack fashion.

I've been waiting the past two issues for Suriano to really break out with his art into more adventurous page layouts and design, and we're starting to see that much more here.  Pages 2, 3, 7, 13, 14, and 18 are all pretty great.  Had I the money I would totally purchase page 18 (I don't want to post it here for spoiler purposes)... absolutely beautiful.

Coming up in issue 6: the Scotsman.  Yesss.
I'd like to see Gloer the Great return too... he has that same kind of charm.  Samurai Jack ginger team-ups rule.