Under a Mike Mignola-pencilled, Ty Templeton-inked cover featuring Green Lantern are six chapters of stories either in progress or concluding.

Green Lantern, by Peter David and Tod Smith reworks Hal Jordan's origin (as well as retooling the Lantern Corps in a small way) in that Hal was not always completely without fear but that Abin Sur, afraid while meeting his end, wished the ring bearer to be without fear.  As anyone without fear would probably be a total loon it chose the best candidate with the closest criteria... then lobotomized the fear right out of him!  Seriously.

The Phantom Stranger arc by Paul Kupperberg, Tom Grindberg, and Bret Breeding: a total snoozefest.  Seriously I nodded off while reading it (not the first time the Stranger has put me to sleep).

Nightwing (and Speedy) ''First Blood" by Marv Wolfman, Chuck Patton and Tom Poston (wasn't he an actor on Newhart or something?).  Dick and Roy try to protect an ambassador from the assassin Cheshire, and dive into Roy's history with her.  On a concept level, I love the Roy /Cheshire thing, but Wolfman can be a little clunky and overt in his writing and it gets pretty bad here. It should really be a Speedy solo story as it has very little to do with Nightwing.

Superman by Roger Stern, Curt Swan and Murphy Anderson.  I gave up on this a down issues ago.  Yawn.

Catwoman by Mindy Newell, Barry Kitson and Bruce Patterson... ends abruptly and only with Selina on the first and last pages.  Was she always a kind of anti-hero?  Or was this just part of her gestation into one?

And finally, Black Canary by Sharon Wright, Randy DuBurke and Pablo Marcos... even though there's no spandex or fishnets, I'm liking this... particularly for DuBurke's art.

The letters column in ACW ask the readers to submit their favourite stories, in order, each issue and then assembles them into "The Great Action Comics Weekly Poll".  This was well pre-internet so there were obviously people... a lot of people... who would just send in their polls, hand written, stuffed in an envelope and mailed off.  It's remarkable how the net has simplified an betterred this type of process.

Now I only need to wait 3 months, or rather, 12 issues to See how my vote fared against others. 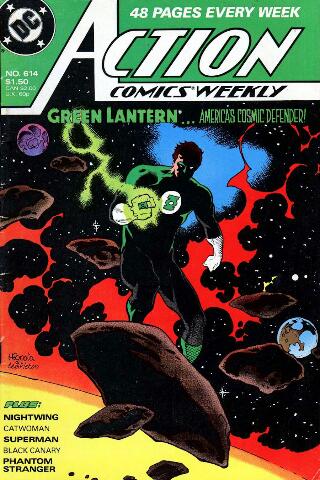