where were you when... 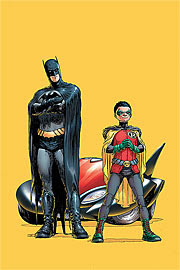 Where were you when Batman first broke on the scene in Detective Comics #27, 1938? Not alive most likely. Do you remember your first ever exposure to Batman, or is he now so ubiquitous that you can't even remember your last exposure to Batman because he's so bloody everywhere. Cartoons, bed sheets, live action movies, posters, action figures, lunch pails, sneakers, pyjamas, t-shirts, berets, backpacks... in a hundred thousand different visual flavours, from Frank Miller to Christopher Nolan, Adam West to Jim Aparo. Even if you're not a comics junkie, you've still been completely unable to escape from the shadow of the bat, and you probably have your perceptions, and possibly favourite interpretations, of who Batman is, exactly. Well, Grant Morrison doesn't care what you think or know... Batman and Robin is about as fresh a start as you're ever going to see on the printed page.

Batman is no longer Bruce Wayne under the cowl. Robin is no longer Dick Grayson (or Jason Todd, or even Tim Drake). No, Bruce Wayne is "dead". Dick Grayson is Batman, and Bruce's estranged son, Damian Al Ghul-Wayne (no, not Damon Wayans, he's "Blankman" remember) is Robin. And it feels so brand new, like discovering Batman and Robin for the first time. Dick has closed up shop on the Batcave, instead moving to the underground lair of Wayne Enterprises' headquarters. They no longer drive a Batmobile or fly a Batplane, but instead a hybrid between the two, an intimidating looking beast that can sneak up from all directions. Dick isn't as grim a Batman as you may be used to, and Damian is hardly as chipper a Robin as you're used to either. Flipping the tables is a nice start.

Morrison has put wonder back into the Batman. He's long stated how fascinated he was with the psychedelic 60's Batman, where he would wind up on Mars or in an alternate dimension and often have a smile on his face. Batman's rogues have always been monsters of some sort, hearkening back to Universal Studios pictures camp-free but fully implausible science-gone-wrong horrors. Here Morrison introduces some new creatures, the stuff of fantasy and nightmares, grimm fairy tales for our new, unfamiliar dynamic duo to face off against. It was a comic that had me reading with eyes wide and a teeth-baring grin on my face.

It's the only comic I've bought lately that I read through twice in the same night. and not because it was confusing. Because it was awesome!

This Dick Grayson felt like the Wolfman Teen Titans Grayson. Fully capable and bad ass with just the hint of a guy who grew up in the shadow of the Bat and so is a little cowed

I was fully prepared to hate this, but, dammit...I thought it was great. Could this be a return to the fantastical stories of the Silver Age? Are we moving out of the darkness of the grim and gritty 90's?
I dont know, but this comic sure was a lot of fun.

It had me with Mr. Toad's wild ride.

I wanted to love it, but couldn't. I didn't hate it: Quietly's art was fantastic, and there were some great moments, like "Crime is doomed" and Pyg, who managed to be creepier in two pages than the Joker has been in years. But I still can't stand Damian (or more specifically, even the idea of Damian), and call me a traditionalist, but Batmobiles shouldn't fly.

Considering how rarely Batman and Robin have appeared together over the past decade, I would have preferred DC held off on launching this title until it really could star Batman and Robin, not Nightwing and the most annoying kid in the DCU.

While I can accept Dick as Batman, I realize I'm going to have some problems reconciling that Tim is not Robin because I love Tim as Robin. But it is definitely an interesting dynamic between Dick and Damien. Hopefully 'interesting' doesn't turn into 'annoying' though and right now I feel Morrison's walking a very close line there with Damien.

I was impressed, and it came out just in time for my Morrison Monday. Yay!

I loved it absolutely. Beautifully written and drawn.